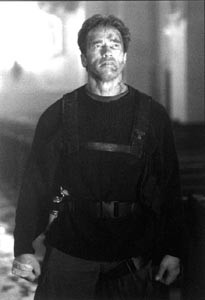 Writer David Templeton takes interesting people to interesting movies in his ongoing quest for the ultimate post-film conversation. This is not a review; rather, it’s a freewheeling, tangential discussion of life, alternative ideas, and popular culture.

“I’M BACK from Hell, ” laughs author Miriam Van Scott, grabbing her notes and heading for a quiet corner of her home in Manassas, Va. The “hell” from which she’s so recently returned was in the form of a new film: End of Days, starring a surprisingly seedy-looking Arnold Schwarzenegger as a suicidal, alcoholic ex-cop duking it out with the Devil (nicely played by Gabriel Byrne) in New York City on New Year’s Eve.

The plot involves an unwitting 20-year-old woman marked from birth as the future mother of Satan’s baby, the conception of which must take place between 11 p.m. and midnight, Eastern Standard Time, on the edge of the year 2000, an event that will somehow bring about the end of life on Earth. It’s all ludicrous, to say the least, and gory–see Arnold spraying bullets at an army of devil worshippers! see Arnold crucified to the side of a church! see Lucifer ram a crucifix into a priest’s forehead!–to the point of being offensive. It is, in other words, a bad film.

At least, that’s my opinion.

“I didn’t think it was as bad as everyone said it was,” Van Scott confesses. “And believe me, I’ve watched so many really, really, really bad Devil movies. I can say that this was far from the worst of them.”

As the author of the informative and oddly charming Encyclopedia of Hell (Thomas Dunne Books; $16.95) and the just-released Encyclopedia of Heaven (St. Martin’s Press; $25.95), Van Scott has–in the interest of research, of course–viewed enough movies about Heaven and Hell to last most of us for an eternity. Scholarly and richly entertaining, the encyclopedias are nicely crammed with nifty netherworld info, pulling examples from the worlds of literature, music, theater, art, and film, and from numerous cultures and religions. Imaginatively compiled, each volume contains references to everything from the Hell’s Angels, heavy-metal music, Faust, and the exact acreage of Hell itself to angels, saints, collectible Heaven plates, and of course, the legendary Pearly Gates.

There are also scads of references to plays and films, with mentions of Heaven Can Wait, Ghost, Hellraiser, Our Town, Don Giovanni, and even Monty Python’s the Meaning of Life .

It seems certain that End of Days will one day end up with a mention of future editions of the Encyclopedia of Hell, if only for its imaginative uses of standard religious icons.

“Though if you didn’t already know an awful lot about Christian iconography, you would have missed a lot of those references,” Van Scott remarks. “They kept flashing the omega symbol–the last letter in the Greek alphabet–but never explained what it was. When Arnold goes into the church at the end, there’s this big statue of St. Michael, who, of course, in the Bible is the one who drove the rebel angels into Hell–but they never tell you it’s St. Michael.”

Or why the Devil might be a little bit pissed off at that particular icon.

Speaking of which, “There’s nothing in your encyclopedia about demonic combustible urine, is there?” I ask, referencing the whimsical moment when Gabriel Byrne relieves himself in the street, then lights a match to the voluminous puddle, thereby blowing up a bevy of interfering police cars.

It certainly gives new meaning the phrase “Lake of Fire.”

Van Scott, who admits to a fondness for “strange, creepy things,” points out that Hell–metaphorically hinted at in the movie by numerous scenes in underground lairs and eerie subway tunnels–is a universally accepted concept, showing up in different forms, in most of the world’s religions.

“The Chinese Buddhists believe in a place of suffering,” she says. “Even religions that teach reincarnation hold the idea of a place where you go and are tormented and punished before being reincarnated. It’s most familiar, obviously, in Judeo-Christian beliefs. In Christianity, it’s central. It’s in all the literature.

“But strangely, in a lot of the world’s religions, the idea of what happens to souls in the afterlife is really almost an afterthought. It’s like, ‘Oh, and then when you die this other stuff happens. . . .’ It’s not the main event.

“But in Christianity,” she adds, “Heaven and Hell are really the basis of the religion.”

“So then,” I am compelled to ask, “as the author books about Heaven and Hell, which place is your favorite?”

“Hell was more interesting to write about, that’s for sure,” she says. “Hell is sensual, and fascinating, and packed with forbiddenness. Heaven is fun too, but it’s so . . . I don’t know. In movies, there’s always something annoying about Heaven. I’ve seen dozens of Heaven movies, but I can’t think of one that made it look really appealing, like something that I’d actually like to do for millions of years.

“Let’s just put it this way,” Van Scott concludes. “Not that I ever want to actually go to Hell or anything, but to me, between Heaven and Hell, Hell would definitely make the better ride at Disneyland. Know what I mean?”