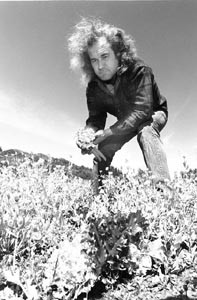 NEWLY DISCLOSED Internal U.S. Food and Drug Administration documents reveal that the agency’s own scientists expressed doubts about its policy toward bioengineered foods while raising questions about the foods’ safety.

The revelations come at a time when the FDA is under increasing pressure from consumer groups and members of Congress to require labeling of bioengineered foods. In response, the agency is holding public meetings–including one this week in Oakland, where Glen Ellen organic farmer Bob Cannard lobbied for a statewide ballot initiative requiring labeling of bioengineered foods–to ask the American people if its policy should be changed.

The FDA documents were released to the Alliance for Bio-Integrity, a coalition of scientists, religious leaders, health professionals, and consumers that is suing the FDA to demand mandatory safety testing and labeling of bioengineered foods.

A legal brief filed recently by the alliance in U.S. District Court, Washington, D.C., quotes several agency scientists who raised objections in FDA memoranda about the agency’s policy before it was established in 1992.

In particular, they challenge the FDA’s view that foods developed by genetic engineering are “substantially equivalent” to those produced by traditional plant breeding unless they contain additional synthetic ingredients. Under this reasoning, the agency does not require labeling of bioengineered foods, and safety testing is voluntary for the companies that produce them.

FDA policy states, “The agency is not aware of any information showing that foods derived by these new [genetic engineering] methods differ from other foods in any meaningful or uniform way, or that, as a class, foods developed by the new technologies present any different or greater safety concern than foods developed by traditional plant breeding.”

However, in a February 1992 memo, Louis J. Pribyl, Ph.D., a scientist in the FDA’s microbiology group, critiqued a policy draft by writing, “There is a profound difference between the types of unexpected effects from traditional breeding and genetic engineering which is just glanced over in this document.”

Pribyl added that several aspects of gene insertion “may be more hazardous than traditional plant crossbreeding.”

In a January 1992 memo, Linda Kahl, an FDA compliance officer, objected that the agency was “trying to fit a square peg into a round hole [by] trying to force an ultimate conclusion that there is no difference between foods modified by genetic engineering and foods modified by traditional breeding practices.”

She continued, “The processes of genetic engineering and traditional breeding are different, and according to the technical experts in the agency, they lead to different risks.”

In a November 1991 memo to James Maryanski, the FDA’s biotechnology coordinator, the FDA’s Division of Food Chemistry and Technology cautioned, “It would be necessary to demonstrate that edible seeds and oils produced from genetically engineered plants do not contain unintended potentially harmful substances at levels that would cause concern.”

According to Steven M. Druker, executive director of the Alliance for Bio-Integrity and coordinator of the lawsuit against the FDA, “Numerous agency experts protested that drafts of the statement of policy were ignoring the recognized potential for bioengineering to produce unexpected toxins and allergens.”

IN A RECENT articulation of the FDA position, Maryanski told the U.S. House Subcommittee on Basic Research on Oct. 19: “Substances added through genetic engineering are well-characterized proteins, fats, and carbohydrates and are functionally very similar to other proteins, fats, and carbohydrates that are commonly and safely consumed in the diet, and so will be presumptively generally recognized as safe.”

The Alliance for Bio-Integrity claims the current FDA policy violates the U.S. Food, Drug, and Cosmetic Act, which mandates that new food additives be established as safe through testing before marketing. The FDA claims that bioengineered organisms are exempt from testing because they are “generally recognized as safe” (or GRAS, in FDA shorthand).

According to the U.S. Food, Drug, and Cosmetic Act, foods can be recognized as safe only on the basis of tests that establish their harmlessness. Druker claims no such tests exist for bioengineered foods.

Two FDA scientists emphasized the lack of scientific data to recognize the safety of bioengineered foods. In her response to the draft of the policy statement, Kahl wrote, “Are we asking the scientific experts to generate the basis for this policy statement in the absence of any data?” She continued, “There is no data that could quantify risk.”

In his critique of the draft, Pribyl, wrote, “Without a sound scientific base to rest on, this becomes a broad, general, ‘What do I have to do to avoid trouble?’ type document.”

According to Druker, “The FDA is using the GRAS exemption to circumvent testing and to approve substances based largely on conjecture that is dubious in the eyes of its own and many experts. Consequently, every genetically engineered food in the United States is on the market illegally and should be recalled for vigorous safety testing.”

Citing the lawsuit, the FDA declined to comment to the American News Service about its scientists’ objections.

Philip J. Regal, professor of ecology, evolution, and behavior at the University of Minnesota and a plaintiff in the lawsuit, said he knew several FDA scientists who were “disgusted” with the policy.

During the early 1980s, Regal was asked to help the government establish a system of regulating biotech foods. He said his goal was to develop a system that would protect the American public. Instead, he said policy development favored biotech companies.

“The bureaucrats were under pressure from the White House to help the biotech industry, which was against regulation and thought it would be too expensive,” he said. “The result was no regulatory system, just a sham.”

According to Regal, the FDA knew about the risks of genetically engineered foods before it drafted policy guidelines but decided it was up to the industry to deal with them. He said a common phrase at the time was “If Americans want progress, they’ll have to be the guinea pigs.”

When he saw genetically engineered foods appearing on the market, Regal said, “It was all I could take,” and became a plaintiff in the lawsuit.

Regal and Druker say a bioengineered ingredient may be responsible for the tragedy in Minnesota that resulted after people took an L-tryptophan food supplement in 1988. According to Druker, who studied government reports of the incident, the supplement was genetically engineered by Showa Denko K.K., a manufacturer based in Japan. Shortly after the supplement was put on the market, many people who took it became ill with eosinophilia myalgia syndrome, a potentially fatal and debilitating disease.

Thirty-seven people died, 1,500 were permanently disabled, and another 4,000 became ill.

While no cause was established, in a September 1991 memo from a meeting with representatives of the Government Accounting Office, FDA biotechnology coordinator Maryanski wrote, “We do not yet know the cause of EMS nor can we rule out the engineering of the organism.”

The FDA has imposed severe restrictions on importing or using L-tryptophan because of its suspected association with EMS. Regal said, “This is the kind of accident you expect from genetic engineering.”

He said the process of insert-ing genes into an organism can cause mutations to existing genes of the organism, creating toxins.

Another plaintiff, Richard Stroh-man, emeritus professor of molecular and cell biology at the University of California, said in an interview with the ANS that planting millions of acres of bioengineered crops, as is done in the United States, is “insanity” because the technology can produce unpredictable and possibly negative changes to plants and their environments. “Many, many years of research are needed before we can arrive at any conclusions about how these plants will work,” Strohman said.

According to an FDA official who spoke on the record but asked not to be named, manufacturers of bioengineered foods “have no reason to produce an unsafe product.”

The agency gives guidance to manufacturers about safety testing, using a flowchart. The official told the ANS that to ensure consumer safety, “there are a series of steps we want to see the manufacturer do. When they find a problem, they stop production. Companies have an interest in producing a safe product.”

The official cited the well-publicized example of Pioneer Hi-Bred’s engineering of a soybean using a Brazil nut gene, which was stopped when it was discovered that it would cause allergies in people who are allergic to Brazil nuts. “The system worked,” said the official.

However, in his 1992 memo, Pribyl of the FDA criticized this voluntary testing, “Why should companies conduct tests as described in the flow- charts if there are no differences between traditional foods and those produced by modern technology? If industry does not follow these ‘should’ items, is the FDA going to perform these tests and penalize the companies or does the agency wait for something to go wrong and then act?”

House Minority Whip David Bonior, D-Mich., has urged the FDA to reverse its policy, and Dennis Kucinich, D-Ohio, plans to introduce a bill to require labels on genetically engineered foods.

Last June, a group called Mothers for Natural Law delivered petitions with 500,000 signatures to the FDA demanding safety testing and labeling. Consumers Union, the oldest and largest association of American consumers with 4.7 million member households, called for the same in its September issue of Consumer Reports. In response, the FDA has held a series of three public meetings (including this week’s Oakland forum) to inform the public about its policy for ensuring the safety of bioengineered foods and to ask for input about whether its policy should be changed.

An FDA spokesperson said, “We’re in a listening mode. We want to get information from the American public and want to know if what we’re doing is good enough to make people feel comfortable. We will consider everything we hear.”

The FDA will continue to accept public comment on its bioengineered foods policies for several weeks. You can e-mail the agency at www.FDA.gov.