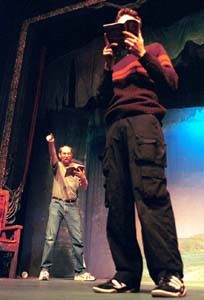 Acting up: Auditioning for The Complete Works of William Shakespeare (Abridged) is no joke for writer David Templeton and John DiSessa.

I’M NOT NERVOUS. Really, I’m not. As I push through the old double doors of the venerable Lincoln Arts Center in Santa Rosa, following a series of arrowed signs marked “Audition,” the only sensation I feel is a crushing, throbbing ache on the right side of my head–as if I’d just been whacked in the face, commedia style, with a large wet salami.

In truth, I’m feeling better than earlier today, when I was blindsided by a rare migraine headache. For a while there I thought I’d have to skip tonight’s open-call audition for Santa Rosa Players’ upcoming production of The Complete Works of William Shakespeare (Abridged).

As they say, however, the show must go on. So here I am.

“Fill out an audition form and take a seat,” suggests a helpful woman, pointing to a stack of forms as I step into the theater lobby and blink at the bright lights.

The room is humming with talk and laughter (or is that just my head?) as two dozen of my fellow auditioners mill about, chatting and joking.

As I jot my particulars on the form–thinking, “Jeez! It’s been how many years since I performed on stage?”–I scope out the competition: mostly male (maybe five women); mostly young (at 39, I don’t include myself among those ranks).

“I was thinking I may be a bit old for this,” says Jon Vissman, a late-40-ish gentleman waiting nearby. “I don’t know. I just love the play.”

The Complete Works, based on a famous live show originated by the Reduced Shakespeare Company, follows three hapless actors as they attempt to perform all of the Bard’s plays in a single evening.

Vissman, who’s seen the show performed locally–once with a cast of three women, in a show directed by Carl Hamilton, who’ll also be directing this new production–has been in numerous local productions over the last several years.

As he explains it to me, he had his first taste of Shakespeare back in 1979, playing a few small roles with the Marin Shakespeare Festival, and loved it. But then he got married, other responsibilities followed, and, in his words, “all of that dropped away.”

But recently, taking advantage of Sonoma County’s large and fertile theater scene–which ranges from the prolific Santa Rosa Players and Sonoma County Repertory Theatre to the inventive Cinnabar Theater and Actors’ Theater to various Shakespeare festivals and many small actor-driven theatrical companies–Vissman has had plenty of opportunities to develop his theatrical chops.

“As for tonight,” he says, laughing, “I’m just here for the experience.”

“THIS IS A BIG, broad physical show,” warns Hamilton, leaning against the stage. “It’s very, very demanding.” We’re inside the theater now, and Hamilton has been going over the rehearsal schedule and a few other details, warming us up for the audition.

“I like to audition people a little bit strangely,” he explains. “Some people don’t like it. Sorry.”

In most auditions, the actors are called to the stage one by one for individual readings. In musicals–a popular staple on the community theater landscape–performers usually come prepared with a short song, which they sing along with a live accompanist.

After an initial round of tryouts, a selected few are called back for further auditioning.

Tonight’s audition will be different. Lined up on the stage are three scripts, one for each of part, each highlighted with that character’s lines. Three volunteers will grab a script randomly and take the stage, running through their lines and stage directions until Carl asks for another three volunteers. We will go through the entire play in this fashion, each of having several opportunities to strut our stuff, or embarrass ourselves, as the case may be.

“Don’t be afraid to be uninhibited,” Hamilton counsels, and the games begin.

Vissman is among the first onstage, along with an energetic, bandanna’d woman with an expressive face, and another woman with a strong voice and a good sense of comic timing.

With scripts in hand, they race through the first few pages.

“Thank you,” Hamilton calls out from the back of the room. “Another three, please.”

As a trio of strapping 20-somethings take the stage, Vissman takes his seat. “I think I sucked,” he murmurs, good-naturedly, to fellow auditioner Sheri DuMay, who seems a bit intimidated as the young men run breathlessly through a wacky minimalist version of Romeo and Juliet, culminating as an exuberant Juliet pretends to throw up on the audience.

“Thank you. Next three, please.”

IT’S MY TURN. Taking my script, and ascending the stage, I realize that we’re about to assault the tale of Macbeth. I’ll be Macbeth. “Stay, ye imperrrfect mac-speaker!” I read aloud, letting loose with my best bad-Scottish accent. Forgetting my migraine, I face off against the fellow playing MacDuff, who reads, “I was from my mother’s womb untimely ripped. What d’ye think about that?”

“It’s bloody disgusting,” I snarl back at him, semi-wickedly, then shout, “Lay on, ye great haggis-face.” We improvise a swift and violent sword fight, after which my head is hacked off, offstage.

Without pausing, we rush on through Julius Caesar and Antony and Cleopatra, reduced comically down to little more than the death scenes. “Thank you,” Hamilton says. “Next three, please.”

WE’VE MADE IT through the entire play. Vissman and I have each been on stage three times, and DuMay–star of last summer’s SRP production of Lend Me a Tenor–with a little encouragement from Vissman, has gone up once. Some of the younger folk were up five or six times.

“Thank you, everyone. Come back tomorrow night,” shouts Hamilton, “and we’ll do the whole thing over again.”

As I head for the parking lot, I’m suddenly aware that my headache has vanished, no doubt chased away by the adrenaline rush of being on a real stage again after nearly 18 years.

Community theater is a difficult entity to define. Some volunteer-based theater groups staunchly resist calling it community theater because of those who view it as being amateur or unprofessional–as being “not real theater.”

And yet, based on the number of community theater groups in Sonoma County–and the popularity of such shows as the Players’ recent sold-out run of Camelot and Sonoma County Rep’s well-attended A Christmas Carol–it’s clear that the hard-to-pin-down phenomenon is serving a vital function.

“Community theater is crucial, absolutely crucial,” says Hamilton, a local director for over 23 years, whose own Odyssey Theater company has performed dozens of challenging plays over the years.

“It keeps the craft of theater alive. There are community theaters around the United States that have been alive 30 and 40 years, and some of them do topnotch work. I’ve worked with plenty of actors here in Sonoma County who are as good as anybody, anywhere.”

“The truth is we live in a 9-to-5 world,” says John Rathjen, an oft-seen local actor who was recently in Camelot. “Obviously, not every actor or director, no matter how talented they are, can afford to quit their 9-to-5 job and run off to be brilliant, but community theater gives them a place to exercise those parts of themselves.

“And it gives them an audience that really wants them to have those opportunities.”

ONSTAGE, script in hand, I’m standing beside Vissman and the bandanna woman, the three of us out of breath from having just performed Hamlet–backwards–for the grand finale of the play. The second night of auditions is now officially over.

“Well, at least this was fun,” Vissman says, still certain he hasn’t a chance at a part–as am I. After all, this will be a physically demanding show, and those young people were so much . . . younger.

Then Hamilton approaches us. He lowers his voice and informs Zissman and me that we’ve each won a part. The third opening will go to DuMay. Formal rehearsals start after the holidays. We should have the script memorized by then.

“Congratulations,” he says with a smile.

Indeed. I mean, who’d have guessed?

“Well,” Vissman shrugs. “This is what community theater is all about. It’s never knowing quite what to expect.”