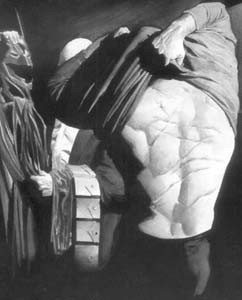 Batman in the ‘Hood

GENTRIFIERS and drug peddlers alike feel the wrath of Batman in Batman: War on Crime by writer Paul Dini and artist Alex Ross (DC; $9.95). The album-sized comic is a follow-up to last year’s bestseller Superman: Peace on Earth. An artistic and financial success, Superman: Peace on Earth had sales of $7 million in the midst of the usual depressed market for comic books.

The art for Superman: Peace on Earth was auctioned off, raising $100,000 for charity. Likely, Ross’ artwork for Batman: War on Crime will raise a similar small fortune when it is auctioned off for its beneficiary, the John A. Reisenbach school in Harlem, the only non-profit charter school in New York. (Reisenbach was a young New York ad man murdered during a robbery nine years ago; after his death, a fund was set up in his name to finance education.)

The proceeds go to a good cause, then, and it is a book from two cartoonists who work well together. And yet I can’t recommend it without reservation.

In Batman: War on Crime, an African-American ghetto kid named Marcus is orphaned by a robbery. Marcus’ plight, of course, matches the story of Bruce Wayne–Wayne, whose parents were shot by robbers and who has been carrying out a masked mission of vengeance as Batman ever since.

Batman: War on Crime doesn’t really have a villain, except for a crony of Wayne’s named Randall Winters, a self-indulgent, conscienceless developer who has been hiring off-duty Gotham cops to rough up the gangstas in Marcus’ neighborhood. Winters is plotting to pave over the slum with expensive condos and malls. Wayne absorbs Winters’ redevelopment schemes with a few words that demonstrate our hero’s iciness: “Randall has always spoken of me as a close friend, presuming on the familiarity created by our social environment.”

Ross’ Batman looks beef-fed, jowly, and not a day under 40. Because of his size, his eyebrows, and his rectitude, he looks like a dark-haired Scandinavian, a Swede. He’s a huge and very cold fish. When he takes his shirt off, we see that his torso is crisscrossed with deep scars, as if he’d been flogged.

Ross handles the artistic problem of turning a cartoon real by highlighting the ordinariness of Gotham City. One scene is a rich party staged in the sterile glamour of a culture palace: it could be New York’s Lincoln Center, the Kennedy Center in Washington, D.C., or L.A.’s Dorothy Chandler Pavilion–all those auditoriums that sound so grand but turn out to look so tatty.

None of the grotesque Batman villains are shown, but we get glimpses of familiar characters: a man whose one enlarged eye tells us that he might be Two-Face; a figure whose kid gloves and string tie may tip us off that he’s the Joker. I wish Ross and Dini had turned to the more fanciful villains in Batman lore for this book, because when Batman goes up against the more mundane ‘hood dwellers, Batman: War on Crime takes a distressing turn.

ROSS’ SKILL as a representational artist lifts Batman out of where he belongs–in a fantasy world–and places him in the real one. But that’s the problem with Ross and Dini’s book: its realism. When Superman decided to give the world a Christmas dinner in Peace on Earth, there was charm to the fantasy. By contrast, Batman’s task is taming his city with violence.

In one scene, Batman attacks a drug lab, scattering a crowd of terrified black criminals. In the real world, yes, there are such things as all-black drug labs. In fiction, Batman might bust a drug lab up. But the unhappy collision of tragic reality and escapist fantasy makes for a racist image: a jackbooted Batman assaulting a room of studiously drawn panicking black men.

This scene of violence isn’t utter fantasy, as you can learn by reading reports on the paramilitary policing in the inner cities during our war on drugs. Christian Parenti’s book Lockdown America: Police and Prisons in an Age of Crisis (Verso) documents cops in SWAT teams already acting like masked vigilantes, attacking slum neighborhoods with their faces concealed under helmets and with badge numbers covered.

Dini is an artist and writer who has helped create the Batman animated series (Adventures of Batman, Adventures of Batman and Robin, and Batman Beyond) now running on the Warner Bros. network. Dini’s different versions of Gotham are color-blind, and maybe that colorblindness should have been continued here.

Probably the good that the sale of Ross’ art will do will outweigh the troubling images. Despite these few pages showing the raid, Batman isn’t a sadist. As always, he has his mystery. Here’s a detective who can’t solve the riddle of his own personality or ask himself if it’s really possible to be a terrorist for a good cause.

The hero’s endless turmoil is anticipated by a passage in Moby Dick. Fleece, the ship’s cook, lectures the sharks that follow the Pequod. Sharks are sharks, but if a shark could control itself, it would be an angel. For all angels are nothing but sharks well-governed.