.Wine Tasting Room of the Week 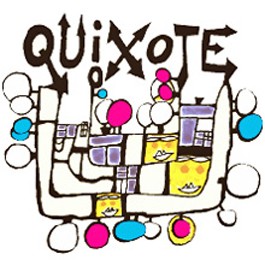 I t’s amusing to imagine what Quixote’s organically farmed vineyards would look like if Friedensreich Hundertwasser had had a go at them. The architect might have demanded that no two of the same varietal be planted side by side. Mismatched trellis styles would spiral across the vineyard, grapes would spill over the roof and straight rows would be forbidden!

Fortunately for the vineyard manager, the Austrian iconoclast designed the winery building, which is now the sole mecca for Hundertwasser fans in the United States. In these pages, we’ve covered Quixote in advance of its long-anticipated public opening (June 22 and Nov. 23, 2005), then explored the architecture (June 13, 2007), and now we come to drink the wine.

Former Stag’s Leap Winery owner Carl Doumani was looking for something different for his new project. When he happened upon Hundertwasser, he inherited a legacy. Hundertwasser (1928–2000) rejected the “dictatorial” hard edges of modernism. He abhorred the straight line, the flat surface and uniformity, and sought to reconnect humanity with natural forms. The warmth with which people react to his buildings suggests that he achieved more than postmodern gimmickry. There is a sense of dignity to the colorful little castle that grows out of the landscape beneath the Stag’s Leap palisades, commensurate with the architect’s humanistic aspirations. That is carried over into the appointment-only tasting at Quixote Winery, a leisurely experience worth the admission.

Behind me, autumn sunlight streams through windows framed by voluptuous glazed columns. General manager Lew Price sits at the head of a large plank conference table and introduces each wine as the group seems ready. Three separate parties strike up easy conversation mostly, of course, about the architecture. Everybody has a Hundertwasser story. A young lawyer from San Francisco had always wondered about the poster of Hundertwasser that she’d grown up with courtesy of her father, also in attendance. I once answered an ad for a ride share in Vienna. The driver told me to meet him at the corner of such-and-such streets. When I looked up across the street, there was the famous Hundertwasser housing project, all turrets and splashes of tile, and trees growing willy-nilly.

The wine? Yes, well the initial citrus zest of the 2001 Quixote Cabernet Sauvignon ($60) is followed by silky tannins in harmony with lush plum fruit. The 2002 Quixote Petite Syrah ($80) is also uncommonly soft and complex, dark with plum and dense as fruit leather. The 2004 Quixote Petite Syrah ($60) represents an anomaly vintage, Price says, but it got my attention for its rich flavors of black cherry, black licorice, cool earth and fruitcake and prominent tannin. The 2004 Panza Claret ($40) is lighter bodied, with a bright nose of plum and Bing cherries.

Besides the labels and the screw-cap enclosures, there’s nothing particularly offbeat here. Quixote and Panza (the “value” label named for the literary sidekick) wines are all about warmth, texture and seamless integration. Would the proper Hundertwasser response be to smash the bottle? That’s what he did to a shipment of tiles he deemed “too perfect.” I think I’d rather admire the wine’s people-friendly, organic, rounded shape in the mid-palate a little while longer.