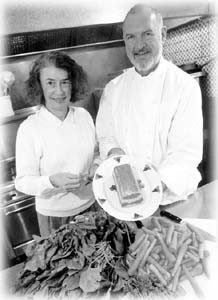 To Every Season: Joanne and Keith Filipello display a savory terrine just right for the warmer months.

THIS IS WHAT the good life looks like at 10 a.m. on a drizzly February morning: Three quietly occupied workers peel carrots, sauté leeks, and unpack produce in the kitchen of a renovated adobe building near Sonoma. A cheery oilcloth settles upon a small round table flanked by unmatched chairs in a long-windowed main room. A bright playpen nestles into the corner of an office, waiting for the day’s arrival of a secretary’s 4-month-old baby. Adjacent to the office, a cookbook library awaits final shelving, an electric-blue drum kit sits unused in the corner, and a burned-out baking sheet–savagely scratched at–is affixed within a funky frame hanging on the wall.

The good life doesn’t require much: It smells like leeks and butter and sage cooking before noon; it sounds like the Cuban dance, gospel, and bluegrass music that bounces from the kitchen’s CD player; it looks like a half-dozen well-dripped candles arranged carelessly on an old wooden table. And it is lived by Keith and Joanne Filipello, chefs and proprietors of the 8-year-old Wild Thyme catering company housed in their Sazón de El Verano complex of tasting, dining, and working rooms.

The Filipellos, who owned the Capri and Eastside Grill restaurants on Sonoma Plaza before unhappy legal times with their former partners lost them the grill and sent them expatriating themselves to Europe for a few rejuvenating years, have stood the heat of the kitchen for some time.

Keith cooked at San Francisco’s venerable Ernie’s restaurant before working under chef Masa at Napa Valley’s esteemed Auberge du Soleil and becoming the banquet chef for the Sonoma Mission Inn. Joanne created the gourmet deli for the Sonoma Market after acting for some years as head chef at Sonoma’s fashionable Westerbeke Ranch complex.

One can safely assume that between the two of them, they can operate a Cuisinart.

What they also want to operate is a Website offering the professional profiles of some 60 servers available for extra wait-work, classes on food and wine service and on food and wine period, kitchen ESL for both sides of the language barrier, and a lending library of cookbooks that far exceeds what the public library offers, including reference books written and signed by the late M.F.K. Fisher, a great friend of the Filipellos.

All this change at Wild Thyme begins with the changing of the seasons.

Although the unhappy damp of the morning lies wetly puddled on Sazón’s patio, there are plum trees pinkly lining the streets and hay-fever sufferers are already acutely aware that the acacia are in bloom. Spring, in fact, is on its blustery way. And with the coming of lighter days, cooks (and that means anyone who can open a can) get anxious to clear the cupboards and bring the season to the table. The Filipellos assert that, Kermit notwithstanding, it is easy being green.

“Certainly the color green comes to mind in the spring,” says Joanne, a soft-spoken woman who seats herself at the oilcloth-covered table. “All the wonderful greens that are fresh and local, aside from some root vegetables–carrots and things like that. But I really like to play up the spring green idea, including baby bok choy, even field mustards,” she adds, asserting that ingenious cooks can simply wade into the mustard fields yellowing most county hillsides and return to the car with an armful of dinner. Or, at least, an armful of dinner additions. “You can put the flowers in salads, you can mix the greens with other greens,” Filipello says. “The leaves are kind of hot, but that adds a note of spice.”

Filipello also recommends a Spring Green Lasagne full of sautéed leafy vegetables. Filled with ricotta or fresh local soft Jack cheese, as well as aged Jack, this lasagne is melded with a béchamel sauce and layered between spinach pasta for the final color note.

“What else?” she muses. “Hmmm, well, fresh pea soup works really well. A lot of people like that with a touch of fresh mint, which is just starting to come in.” Prepare the soup with a good vegetable or chicken stock blended into an olive oil­based sauté of onions and well-chopped leeks, add about a pound of shelled fresh peas, and cook until tender. Purée the mixture and add enough cream to lighten. Serve with fresh chopped mint.

Keith Filipello returns from a last-minute produce run in preparation for the night’s catering job. His hands enlarged from work like a farmer’s, Filipello dislikes shopping for fresh produce anywhere other than straight from the fields. “We rely a lot on the farmers’ market here in town,” he says, “because that really gives you a pulse of what’s growing here in the county.”

“Did you go this week?” his wife asks, having been away for the weekend. He affirms. “Did you get beets?” she inquires. A smile spreads across Filipello’s face.

“Yes. Sweet, sweet Target beets, wonderful Target beets,” he reminisces. “There’s always borscht,” he chuckles, “but my preference is to have them lightly steamed and then sliced with just a bit of balsamic vinegar and some extra-virgin olive oil on top, and some chopped chives. The flavor just leaps out at you, it becomes almost a sweet/sour thing because of the sweetness of the beets.”