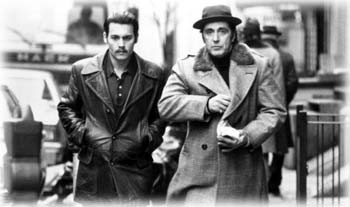 I DON’T GO to the movies often,” admits Dr. Reinhold Aman, Ph.D., just moments after seeing Donnie Brasco, a fascinating new gangster epic set in the Italian neighborhoods of New York. We’ve invaded a nearby restaurant to discuss the film, but first my guest wants me to know the monumental nature of this occasion.

“Do you know when I was last in a movie theater?” he asks. “Do you know how long it’s been?” He let’s the question dangle there, until he finally names the date.

It was 1987. The movie was Stanley Kubrick’s Full Metal Jacket.

Then again, my guest has been pretty busy. Not only does the Bavarian-born professor operate a thriving, 20-year-old, one-man publishing empire, but there is also that notorious, semi-annual act of intellectual anarchy known as Maledicta: The International Journal of Verbal Aggression, a scholarly collection of dirty insults and curses.

There was also that federal prison stint a few years back, after Aman was convicted for distributing insulting pamphlets about a divorce judge in Wisconsin (yes, it’s a crime). And then there is his recent book, Hillary Clinton’s Pen Pal: A Guide to Life and Lingo in Federal Prison (Maledicta, 1996), which he has been busily promoting.

I suppose, on reflection, that all of that could keep anyone out of a theater.

“The truth is, I don’t like most movies,” Aman confesses. The only reason he went to see that particular film 10 years ago was that Kubrick–a longtime admirer of Aman’s work–peppered his script with juicy lines borrowed from the pages of a Maledicta.

An example: In one memorable scene of that Vietnam-based film, a man tries to sell his prostitute sister to a group of GIs, promising, “She’s so good she could suck the chrome off a trailer hitch.”

“That was one of mine,” Aman shrugs, smiling. “When I heard that up on the screen, I thought I’d died and gone to heaven. Unfortunately, the movie was virtually blackballed in this country. Its vulgarity was too honest and realistic.”

And speaking of realistic vulgarity, Donnie Brasco is a veritable primer of raw, underworld slang; its ’70s-era gangsters all spout a testosterone-fueled stream of obscenities, street talk, and Mafia lingo that come off like a secret code made up by young bullies. Based on a true story, Donnie is about an FBI Agent (Johnny Depp) who infiltrates the New York Mafia by befriending a used-up hit man named Lefty (the brilliant Al Pacino). A gripping and intelligent exploration of an unlikely alliance between two men, Brasco is set in a world where words can be as deadly as weapons.

“There is a glossary of Mob Speak on the Maledicta Web page,” Aman says of his well-maintained site.

“In Donnie Brasco,” he continues, “the use of vulgarity was pretty good. They said ‘fuck’ just enough to be realistic without going overboard. But I think that they, being Italian, growing up in Italian-speaking families, would have used a lot more blasphemy. They would say, ‘Hostia Madonna,’ or they’d use the name of Christ or Mary. And they would use more authentic Italian obscenities, like ‘Tu cazzo!’ That means, ‘You prick!’ It’s very common.”

“I like the word whacking,” he muses. “You and me, we’d say ‘kill’ or ‘wipe out,’ but ‘whacking’! Whacking is when you slap somebody. So they really intensify the meaning of their actions by using a relatively harmless word to describe it.”

Going on to describe a number of his “acquaintances” from the federal penitentiary, Aman continues. “One was a typical Brooklyn Mafioso. He just said ‘fuck’ a lot. Fuckin’ this and fuckin’ that. Cursing everyone, cursing his fate! He was always a decent guy to me. He always saved his crossword puzzle for me.

“There was another guy who hated me, but he gave me one of the best quotes in my book. It was my first or second night in prison. I said something insignificant, I forget what. This guy next to me was a 75-year-old lifetime Mafioso, and he thought I was talking about him.

“So he screamed at me, ‘I’m gonna fuck a hole in your head!’ And I was too sassy. I didn’t know yet how dangerous prison is. So I said, ‘Oh yeah? You? With your shriveled-up little dick?’

“He was stunned for a moment by this incredible sassiness from a young punk. Then he said, ‘Well then, I’m gonna have somebody else fuck a hole in your head!'” Aman chuckles at the thought. ” I could have been killed. I should never have done that.”

Perhaps not. But it is a great quote.