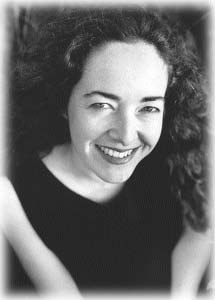 The Devil Made Her Do It: Cotati author Cynthia Lamb’s new novel traces her heritage.

Photo by Joshua B. Rosten

TALK ABOUT your closet full of skeletons. While some families may admit to an adulterer or two, an attic-bound mad aunt, or the occasional homicidal maniac, Cotati writer Cynthia Lamb finds herself in direct lineage to the Devil. The Jersey Devil that is, the bogeyman of the Eastern Seaboard, feared through the centuries by over-mothered children who have been told that if oatmeal isn’t eaten, bedtime not observed, the Jersey Devil will come sweeping from the boggy swamps and carry them away.

“It’s a little bit like saying that you’re related to Bigfoot,” Lamb laughs merrily. “Because it’s just this creature that lives in the pine barrens and scares little children.”

Legend has it that Lamb’s maternal ancestor Deborah Smith–a woman of noted healing and witching abilities–came to these shores from England in 1704, betrothed to Japhet Leeds, a man whom she had never met. She bore him 12 children without unusual incident, but then came unlucky baby No. 13. According to lore, the middle-aged Deborah invoked the name of the Devil during the agony of her last child’s birth. When the umbilical cord was cut, the babe grew from infant to man to green-scaled monster in a matter of minutes. It flew the confines of the room, spouting the hot sulfurous breath of the underworld, finally crashing through the window while the midwife and other birth attendants dove to the floor.

By morning, the neighboring farms had been ravaged of their animals, the milk was curdled, the butter spoilt, and the legend of the originally named Leeds Devil had been born.

Lamb’s family name of Leeds was excised in 1939 when New Jersey formally adopted the Devil as its own state demon. Titling a professional ice hockey team after the monster was clearly the next logical step.

“My great-aunts and grandparents have always been proud of the legend, and they’ve kept it alive,” says Lamb, seated on the outside patio behind her country house. Pots of herbs and yet-to-bloom flowers are set low around her, the green vast fields of Cotati broken dully to the north by the newly built strip malls near the freeway. “But at this point in the popular folklore, the family connection has been lost for the most part. Historians and folklorists know about it, but not the general layperson.”

Lamb has set out to change all of that. Intrigued by the fantastic aspect of the legend as well as by her ancestor’s supposed healing and wiccan powers, she began historical research on her family while still in college. What she discovered was that Deborah Leeds, known respectfully as Mother Leeds, was a historical enigma. Curious about her powerful ancestor, Lamb endeavored to discover her in fiction.

The resulting novel, Brigid’s Charge (Bay Island Books, $14), traces Deborah’s early training in the wiccan path, following her across the Atlantic to the cold Jersey shores and on through her early dotage.

“I haven’t heard from the New Jersey clan yet,” says Lamb of her East Coast relations. “I’m chicken about it. They’ve always been proud of [their heritage], but Deborah’s pretty out there. No one’s ever told Mother Leed’s story before. It’s one thing to have a single line in a [historical record] that says that Mother Leeds was a healer and a witch; it’s another thing to have a whole book that makes her a heroine.”

“The book really wrote itself,” she smiles, “and I like to live with my characters for a long time. One of the advantages I think of setting it in a Quaker community is that they were so progressive that they do seem modern. I read their journals, and the women had the same concerns that modern women would have. Not our generation per se,” says the 34-year-old Lamb, “but the generation before: When a woman would preach, she often would go through a lot of the same self-doubting of her worthiness that the feminists of the ’70s went through. So it does have a modern feel to it. I always thought that was helpful; it’s authentic.”

Most authentic of all is Mother Leeds, a woman uneasily accommodating her affection for another woman; a midwife and a healer; a pagan who can feel the bloodlines pulsing through trees. “She just came to me,” Lamb says. “I have very little information about her specifically. I hope that there is a [diary] out there in someone’s attic and that person will write to me and say, ‘Here it is.'”

Planning a sequel to Brigid’s Charge set some 100 years after the Devil’s first arrival and concerning Deborah’s great-great relatives, Lamb continues to write without outline or plan, allowing the characters and plot to happen as they wish.

“What I’m really in awe of is that I sit down and I don’t know what’s going to come out, and then a few hours later I have a chapter,” says Lamb. “And that’s how I wrote Brigid’s Charge, I didn’t plan any of it. I think that what’s exciting about the writing process is not knowing what’s going to happen next, so that I’m in the same place as the reader. I love that. I love that.”