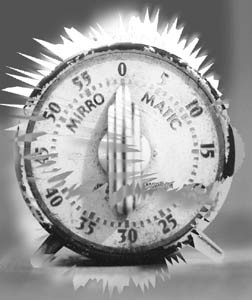 Tight as a Clam

Unspoken veneration of my mother

ON THE EVE of Mother’s Day, I want to confess some things about my mom and me. For a long time–pretty much from age 10 on–I had no patience with her cooking. Even at an early age I thought, “There must be something better than this,” something better than overcooked liver and underdone meatloaf (ketchup being the crude antidote in both cases).

Later, as I ventured out into the world and found that there were, indeed, many things better than that, I found a strange satisfaction in taking her and my father out to eat from time to time. I used to feel quietly smug watching them stare with incomprehension at the menus of “California cooking” or Thai food. I encouraged my mother to try new things, but only as a way of spotlighting her ignorance. And when she ate something I recommended and liked it, my heart swelled with a condescending pride.

But I stopped taking enjoyment in this whole game about a year ago, when I was visiting home on a business trip and invited my mother out to lunch. Please understand that my family doesn’t “do” lunch; they eat it, at home, off of cut-rate sandwich bread. But this was an expense-account lunch, and I could not resist the opportunity, once again, to show off.

Wanting to see what food she dreamed of, I urged my mother to pick a place that she always wanted to go to. When she chose a theme-burger establishment, the kind of place where every sandwich has a pop-culture hook, I could barely stifle a smirk. I ordered a burger and expected her to follow suit, with her usual shy “the same, please.”

Instead she closed the menu and looked up at the waitress. “I’ll have the clam strips.”

I looked at her. “The clam strips.”

“Yes,” she said, fiddling nervously with the straw in her root beer after the waitress walked off. “I’ve never had them before.”

At the time, I didn’t appreciate that this was a food choice that she had made all on her own, that I had not coached her, that this might be a first in my mother’s life. Instead, I focused all my attention on my mother’s thoughtless wanderings into the realm of deep-fried danger, drawing upon all my powers as a food writer and reader to quote countless literary references to clam strips, none of them complimentary. I suggested that deep-fried anything in this restaurant would come to a bad end. I even tried to frighten her with tales of the mutant clams that were set aside just for this purpose. But she resisted with a vigor that surprised me.

When the basketful of spindly-looking deep-fried strands arrived, my mom eagerly picked one up and tried it. Then another, and another. I watched her closely, but could tell no sign of extreme feeling either way. Unable to restrain my curiosity, I reached out, picked out one of the plumper specimens, and took a bite.

It was awful. Rubbery, grease-soaked, and flavorless. “Do you like it?” I asked doubtfully.

But even after the sulky waitress went back to the kitchen with a replacement order, my mother persisted in eating the clam strips. She carefully dipped them into her little plastic cup of marinara sauce and ate them quickly.

AS I WATCHED, it hit me: Here she had taken a risk, and was determined to live with the consequence. Her postmodern daughter had urged her into recklessness, but her post-World War II upbringing would not let her waste food. And years of feeding ungrateful kids all the food in the pan, while she got the the scraps, had left her unable to stand up and say that she deserved better.

I wanted to jump up and hug her and tell her that she didn’t have to eat it if she didn’t want to. But I knew that she wouldn’t stop. And so I sat there and poked at my cold burger, and tried not to cry.