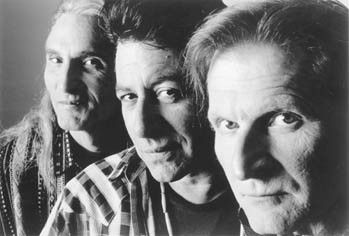 “I’M A DUAL personality,” says singer-songwriter Jimmie Dale Gilmore with a quiet laugh during a phone interview last year. “You know, I’m sort of the new kid on the block–enjoying a newfound success–and I’m the jaded veteran. I guess you could say I’m watching it unfold through both sets of eyes.”

It’s an unusual situation, to be sure.

Nearly 35 years ago, Gilmore’s now-defunct band, the legendary Flatlanders–Gilmore, Joe Ely, and Butch Hancock–helped pave the way for today’s trendy retro- and alt-country sound with an innovative blend of old-timey country, folk, blues, and rock styles. Shunned by the Nashville establishment, this talented trio of Texas troubadours has long enjoyed the dubious status of critics’ darlings. Unlike many of today’s cafe cowboys, these hombres have credentials: Gilmore, born and raised in Lubbock, Texas, had his first demos in 1965 financed by Buddy Holly’s father; Ely, a high school dropout, rambled around the globe as a rock minstrel, and eventually settled back in Lubbock, where he worked as a fruit picker, circus hand, dishwasher, and itinerant musician; and Hancock, also a Lubbock native, spent hours listening to music on border radio stations when he wasn’t driving the tractor on his father’s farm.

In 1971, the Flatlanders–a band that combined modern lyrics and traditional instrumentation, including a musical saw–was, well, big in Lubbock. Their sole 1972 recording (released only on eight-track tape) quickly vanished but became an instant cult classic. In 1990, Rounder Records reissued the album as More a Legend than a Band. Gilmore, Ely, and Hancock became cult heroes, getting the spotlight on Austin City Limits, sometimes making guest appearances on each other’s albums, and, occasionally, to the delight of Americana fans, getting back together for a Flatlanders reunion.

A thousand honky-tonks later, the Flatlanders reunite one more time on Saturday, May 26, at the Mystic Theater in Petaluma.

OF THE THREE, Gilmore probably has enjoyed the widest success. He resurfaced in the mid-’80s on the Oakland-based Hightone label. In 1991, Rolling Stone selected Gilmore as country artist of the year in its prestigious annual rock critics’ poll. And USA Today–and another 100 or so newspapers–named Gilmore’s 1991 major label debut, After Awhile (Elektra), country album of the year. The All Music Guide has noted that he now represents the renegade Austin music scene, in the same way that Willie Nelson once personified the cosmic cowboy.

Ely–who bolstered his career after opening a 1981 British tour for the Clash–found himself locked him out of the Nashville mainstream long before “alt-country” became a commercial option. In a review of his electrifying Live at Antone’s (Rounder) CD last year, Bohemian music critic Karl Byrn opined that “from the opening epic, ‘The Road Goes on Forever,’ to the closing rave-up, ‘Oh Boy!,’ Ely’s originals and covers are spiced with tastefully dueling guitar and pedal steel leads, images of dusty drifters and sweaty roadhouses, and the cheers of hardcore fans who at one point yell out, ‘We love you, Joe!’ ”

Meanwhile, Hancock has languished on the pages of obscure Americana music magazines like No Depression and Dirty Linen. He has released a string of small label CDs–including and self-produced cassettes, including No Two Alike, a 14-tape series recorded during one glorious week at the Cactus Cafe in Austin. He also has penned hit songs for Emmylou Harris and the Texas Tornadoes, but his solo albums–including acoustic-based material that would do Bob Dylan proud–are well worth searching out.