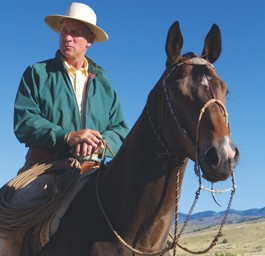 'Buck' a documentary of equine empathy

All really good teachers are, in part, performers. If they’re great teachers, their mask never slips. That’s because what a truly great teacher has to teach isn’t an ordinary curriculum, but a way of life.

Buck Brannaman, subject of the excellent documentary Buck, spends most of his year driving through the West, holding clinics on the gentling of out-of-control horses. An inspiration for The Horse Whisperer, Brannaman had been a rodeo performer from early childhood. Despite his successes, Buck’s stage-managing father beat the boy and his brother so viciously that the county had to intervene.

Apparently Brannaman conquered the rage and fear this experience induced. Buck is most startling in the way we see the magic happen. Moody or misbehaving horses aren’t broken; they’re tamed in front of us. Brannaman speaks of avoiding “rudeness” to them. Finally, the instructor’s methods and courage are tested by a real hell-horse: a huge, brain-damaged stallion from a ranch outside of Chico. It’s a testament to Brannaman’s ability that he never suggests what some of the audience must be thinking: that the horse needs to be calmed down with a Winchester. Instead, Buck’s encounter with the maddened creature stimulates his most philosophical words about the relations of horses and humans.

Is Buck’s story too good to be true? Even Robert Redford admits he thought that was the case when meeting Buck, who was dressed in a 10-gallon hat, fringed chaps and spotless Western threads during a pre-production meeting for The Horse Whisperer.

And yet the documentary respects the limits of its subject. Director Cindy Meehl polishes Brannaman, but never goes against his grain. Buck is quite a show about quite a teacher, and quite a showman. Even the cynical will have to concede that this phenomenally calm and graceful figure is out to help animals and people alike.