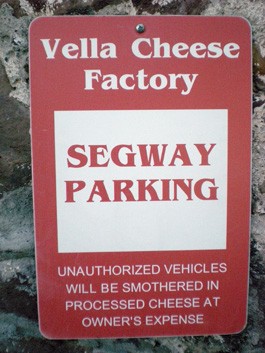 Vella Cheese Company Ignazio “Ig” Vella insists that the Sonoma bridge named in his honor resulted from his decades of county and community service. Still, there can’t be many traffic spans honoring a master cheesemaker. Well, perhaps in France.

“I started working here when I was four years old,” Vella says. “My dad and I would drive into San Francisco to deliver our cheese, especially in North Beach, where most of the Italians and the French lived. I’d throw the cheese from the truck to him.”

The Vellas have never used animal rennet in any of their cheeses. Vella’s vegetable-coagulated cheeses contain only about 1 percent salt, and the edible rinds get rubbed with cocoa, black pepper and vegetable oils.

While Vella cheeses are definitively old-time artisanal—and they have a wall of gold metals to prove it—Vella’s 2007 Sustainable 6 environmental award illustrates just how innovative green technologies like the photovoltaic solar panels installed on the roof of his creamery complement time-honored techniques of a craftsman.

Fittingly, last year Ig Vella was also honored by the trendy and yet back-to-time-proven-basics Slow Food International folks. Carlos Petrini, founder and president of the organization, sent along a letter accompanying the award acclaiming Vella for “work that is helping to improve food that is good from an organoleptic [i.e., taste, smell, sight and feel] point of view, that is sustainable for the environment and fair at a social level.” And if these many hosannas weren’t enough, the Slow Food award gives Ig the perfect excuse to squeeze “organoleptic” into his next acceptance speech. 315 Second St. E., Sonoma. 707.938.3232. —P.J.P.

Jose Matos Cheese Factory Nothing says “Resident Tourist” quite like the Jose Matos Cheese Factory, which offers a perfect opportunity to whisk visiting relatives through the rural Sonoma County that still exists in small word-of-mouth locales. Jose and Mary Matos, a couple from Portugal, make only one kind of cheese, the St. George, at their small farm off Llano Road, and it’s not only delicious but fantastically applicable—I’ve had equal success using it on pizzas, burritos, sandwiches and huevos rancheros. Even better is that buying the stuff is a true backroad adventure.

Drive on Llano Road until you see the Jose Matos sign, just south of Todd Road. Lumber down a bumpy dirt road, past cows grazing udder-deep in manure, and past large diesel gas tanks for the tractors, all the way to the end. Veer left and park next to the large pile of moldy grapefruit. One of the small buildings will have a tiny “Open” sign in the window. Pull the door and hear the unceasing rattle of a very loud bell, alerting the presence of a visitor.

Inside, a diminutive woman will eventually appear in a hairnet, slice off a sample of the cheese from the rustic display case, and silently hand it over. Tell her how much you’d like to buy, and she’ll wrap it up, seven bucks a pound, cash or local check only. Make sure to crane your neck into the back room, where shelves upon wooden shelves hold hundreds of rounds of the aging cheese, and once outside, avoid the arrival of convertible PT Cruisers piloted by winetasters in Bermuda shorts eager to have the same authentic rural farm-tour experience. 3669 Llano Road, Santa Rosa. 707.584.5283.

Lost but Not Forgotten