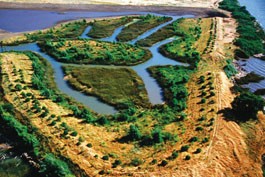 Arbitrary, capricious and contrary to law.” That’s what federal judge Oliver Wanger of Sacramento, in rulings on May 25 and Aug. 31, called state and federal agency plans to pump yet more water out of the state’s already overpumped giant northern Delta.

Wanger not only put a complete stop to these plans, he ordered such a massive cut in Delta pumping that the entire statewide water supply is now decreasing by somewhere between 14 percent and 35 percent, with San Diego losing as much as 30 percent of its supply and the Santa Clara Valley as much as 50 percent, a loss its water agency worries will deplete “our reserves for a major catastrophe.”

Noting that the Delta’s 738,000 acres make it the largest estuary on the West Coast and that California’s State Water Project, which pumps and distributes Delta water, is “among the world’s largest water-diversion projects,” Judge Wanger demanded that the system’s administrators stop destroying it in the quest to irrigate 5 million acres of farmland and provide drinking water for 23 million people. Specifically, he ordered that the federal and state agencies in charge stop killing off the Delta smelt, the once-teeming tiny red fish whose population serves as an aqueous version of the canary in the coal mine, and which is now nearly extinct.

What produced the ruling, and the lawsuit that triggered it, is classic early-21st-century bureaucratic willful blindness.

For years, the state of California overtapped rivers from other states until forced in 2003 to stop. At that point, the State Water Project, needing to fill its 600-mile system of dams, storage reservoirs and pipelines, simply turned to the Delta. And with federal agencies looking the other way, it pumped until the area’s islands began sinking, salt water began intruding, pollution increased, water quality dropped and fish began dying in droves.

In 2005, a number of sport-fishing groups teamed up with the National Resources Defense Council to take legal action, and virtually every state and federal agency involved weighed in to stop them. The Bureau of Reclamation, the U.S. Fish and Wildlife Service, the state Department of Water Resources, water contractors and the Farm Bureau all stepped up to quash the suit.

It is the arbitrariness of the Fish and Wildlife Service, which in 2005 issued an opinion that everything was just fine with the fish and with the Delta, that made up the core of the case. The agency claimed that no one can really tell whether the Delta smelt or other fish are reaching extinction because “not enough is known about the species” due to its two-year life span, which keeps the smelt from living long enough to study, and that therefore it was in “no jeopardy.” The fact that Delta smelt have, in fact, been studied and counted for decades and are at the lowest count ever was apparently an irrelevant detail.

Wanger was having none of it. “Although the process must be implemented by holding meetings and making recommendations, nothing” in the U.S. Fish and Wildlife Service’s policy “requires that any actions ever be taken,” he wrote in his ruling. And that’s not good enough. “The Endangered Species Act requires more.”

When state water agencies offered to cut pumping by a meager 7 percent, Wanger said they would need to cut severely—and hinted that they shouldn’t bother appealing to the Ninth Circuit, either. This, he appeared to say, stops here.

So throughout the state, water agencies are drawing up mandatory rationing plans. San Diego and Los Angeles officials are talking about moratoriums on construction, and Gov. Schwarzenegger has called for a double-topic special legislative session to deal with both statewide healthcare reform and now, as of Wanger’s ruling, the immediate water-supply crisis.

In the meantime, Schwarzenegger, who saw this coming long ago, has both been lobbying for a $5.9 billion plan for a statewide water infrastructure expansion plan that would, among other improvements, build two new reservoirs (with $1 billion solely dedicated to shoring up the Delta), and separately, appointed a Blue Ribbon Task Force on saving the Delta’s water quality, sinking islands, challenged levees and dying fish. Its recommendations are due in November.