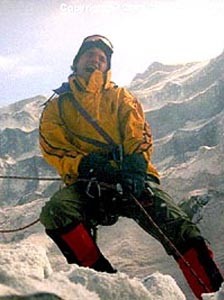 DR. KENNETH Kamler has maneuvered his way up mountains all over the world. From South America to Antarctica, Kamler–a keenly introspective surgeon-turned- mountaineer–has hiked to some of the highest points on this planet, serving as expedition doctor on numerous high-altitude mountain ascents, including six on mighty Mount Everest. He’s helped map parts of that mountain for National Geographic Magazine, and has worked with NASA, scaling Everest to test high-altitude medical equipment.

Most notably, in 1996, he was team doctor on Everest during the infamous storm that killed climber Rob Hall and five others, a disaster that would have claimed more lives had Kamler not been there. He’s captured this experience, and others, in a new book, Doctor on Everest: Emergency Medicine at the Top of the World (Lyons Press; $21.95), a mesmerizing first-person tour through the mind and body of a high-level mountain climber.

To all of these achievements, add Kamler’s role as a gifted microsurgeon and his position as director of the Hand Treatment Center in New Hyde Park, N,Y. Taken together, it’s an impressive list, revealing one remarkable accomplishment after another.

And now Dr. Kamler has added one more to that list.

Last night he went to the movies.

“It’s really kind of an amazing thing, because I haven’t been to the movies in years,” Kamler admits, somewhat shyly. “The last film I saw was Everest, the IMAX movie, ’cause, um, I was in that.”

But that was then and this is now.

The film that lured Kamler into a theater this time was Vertical Limit, the rock ’em-sock ’em action flick starring Chris O’Donnell, Bill Paxton, and Scott Glenn. The film is set on Pakistan’s K2–at 28,000 feet, the second highest mountain in the world (after Mount Everest’s 29,035 feet). It follows a team of crusty mountaineers as they attempt to rescue three climbers–a ruthless millionaire (Paxton) and two others–who survived an avalanche but were swept into an icy crevasse near the summit. The rescue team, including one climber (O’Donnell) with a sister in the crevasse, is led by a toeless Zen climber with “issues” (Glenn).

The team hauls nitroglycerin up the mountain for poorly explained reasons.

“I actually enjoyed the movie,” Kamler reluctantly confesses, “but don’t tell anyone. It would ruin my reputation as a serious mountaineer.”

“I take it there are a few inaccuracies,” I surmise.

“A few?” Kamler says, laughing. “I think there were parts of Vertical Limit that were pretty gripping, but the story requires a suspension of disbelief that’s greater than the height of K2.

“I’ve never been on K2, but I’ve been on Everest several times, twice with NASA,” he continues. “The NASA expeditions were very well funded, but we didn’t have anywhere near the helicopters, computer stations, and throngs of champagne-drinking party people that the millionaire brought up to that base camp. Base camp in the movie looked like a cross between Mission Control and Mardis Gras.”

It’s true. To celebrate his attempt on K2, the millionaire throws what he calls “the highest party on Earth.” It’s catered. The kegs are flowing. It looks like fun.

“They’re nothing like that,” Kamler insists. “Not with hundreds of people partying. That’s absurd. For one thing, base camp on K2 is at 15,000 feet, where you’ve got maybe half as much oxygen as you’d have at sea level. Trust me, when you can’t breathe, nobody’s in much of a party mood.”

Kamler ticks off a whole spate of other mistakes.

“First of all, any real climber in a crevasse like that,” he says, “would have just climbed out. They had all of their gear. On Everest we climb in and out of crevasses all the time.”

Next: none of the climbers carry oxygen.

“Oxygen is a must at those altitudes,” Kamler says, “especially with all the running and leaping these guys are doing. And nobody was using their goggles. Every climber and every rescuer in this film would have been snowblind within hours.”

Another thing. The millionaire and his team take a helicopter from base camp to 24,000 feet and plan to climb just the final 2,000 feet to the summit, a plan Kamler calls an elaborate suicide. “If somebody climbed suddenly from 15,000 feet up to 26,000 feet in just a few minutes, the sudden lack of oxygen wouldn’t be tolerated by the body. They’d be dropped onto the ice, gasping for air, just waiting to die.

“Besides, if you climb a mountain, you climb from base camp,” he says. “The mountain wouldn’t be considered truly climbed, by any serious climber, if you simply stepped off a helicopter 2,000 feet from the summit and then walked to the top.”

Worst mistake of all: in the movie, O’Donnell addresses the base-camp climbers, begging for volunteers. Kamler found this insulting.

“Climbers are always ready to risk their lives for another climber,” he says. “During the Everest disaster, nobody needed to ask for volunteers. The only questions were what to bring and when to leave.”

Those who do volunteer in the film are mostly kinda nuts.

“Vertical Limit,” says Kamler, “reinforces the myth of the climber as cowboy, as a risk-taking daredevil. But real climbers tend to be softspoken, reflective, educated, intelligent. On off days in base camp, they read and write poetry, they play the violin.”

The violin? That doesn’t sound like a Bill Paxton movie.

“But it’s true,” Dr. Kamler says. “The attractions of climbing are quiet attractions. Climbing’s a thoughtful sport. Big mountains open you up to grand thoughts. In those quiet moments, you learn about your own limits. You discover what’s important to you.

“When all is said and done,” he concludes, “that’s the reason I do it.”