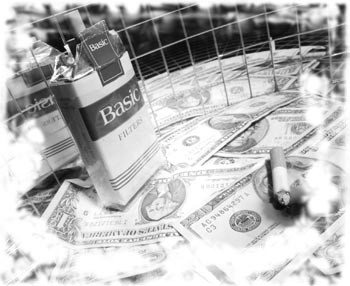 TOBACCO is not supposed to be advertised on TV, yet Philip Morris was there again last night. The ad told the poignant story of a woman who was helped by a donation that the company made to a domestic violence shelter. Philip Morris, the world’s largest and most profitable producer and marketer of consumer packaged goods, recently spent $2 million on domestic violence programs nationally, part of $60 million it spent on charity in 1999.

That same year, Philip Morris spent $108 million on the advertising campaign to tell us about it.

On Dec. 5, Philip Morris announced that it has given an additional $210,000 to domestic violence programs in California, including a $10,000 Doors of Hope grant to Catholic Charities of the Diocese of Santa Rosa, a community-based program that provides services to immigrant victims of spousal abuse.

There is nothing wrong with a corporation supporting good causes. But why advertise about it?

Philip Morris spent 80 percent more on its advertising than on its charity, almost $30,000 every day last year, so we would know what a good corporate citizen it is. This is what corporations do when they’re under fire. Philip Morris is using commercial speech to influence public opinion and political action.

Using advertising to influence public opinion and legislation is not new. In 1908, AT&T launched a campaign to remain a monopoly, followed in 1910 by the railroads using ads to influence local rates hearings, in 1916 by Bethlehem Steel to protest a government armor plant, and the same year by Armour and Swift meat-packing companies to prevent the breakup of their oligopoly. In the 1930s, Du Pont, General Motors, and the National Association of Manufacturers used ads to sell capitalism and refute President Franklin D. Roosevelt’s New Deal.

The domestic violence program and the rest of Philip Morris’ “good works” ad campaign follows in this tradition. The campaign is a smokescreen, specifically calculated to distract your attention from the company’s role in manufacturing, promoting, and selling a product that kills 420,000 Americans each year. (To be fair, judged by its 46 percent market share, Philip Morris tobacco is responsible for 193,200 of those deaths.) Philip Morris is trying to purchase goodwill by associating itself with the tremendously important work of domestic violence programs.

Philip Morris’ motives are transparent. Big Tobacco has never been more vulnerable. Every day, as new documents discovered in the litigation process are distributed, we learn more about its tactics to lure teens into smoking and thwart regulation. The Department of Justice is contemplating federal lawsuits. The Supreme Court heard arguments about whether the FDA should have jurisdiction over tobacco, and the U.S. Congress will now have to decide whether to make that happen. Philip Morris has much to lose. It needs public opinion on its side; it needs to be thought of as a good corporate citizen.

If Philip Morris really cared about preventing domestic violence, it would stop sexist advertising that objectifies women and contributes to attitudes that allow domestic violence to continue. It would discontinue the practice of using women’s bodies to sell cigarettes and beer. It would stop using the idea of independence and slender beauty to sell Virginia Slims. It would take its Miller Beer logo off the breasts of the “Laker girls” who entertain at Los Angeles Laker basketball games. It would recognize the well-established connection between domestic violence and alcohol and prohibit its beer companies from connecting sex with beer in their advertising.

THE REAL tragedy is that domestic violence programs have such a desperate need for funds that they feel they can’t refuse tobacco and alcohol money. It’s no wonder the programs feel desperate: nearly one-third of American women (31 percent) report being physically or sexually abused by a husband or boyfriend at some point in their lives. Where is the support from government, whose job it is to protect all its citizens? Why hasn’t Congress increased support for shelters so they don’t have to turn women and children away? Shelters for women who have been beaten and terrorized should not be at the mercy of tobacco and alcohol companies.

Philip Morris knows all about lobbying. Is it using that expertise in order to lobby for adequate resources so any woman who is battered has a safe place to go?

This campaign is not about domestic violence. It is about diverting national attention from the evils of the tobacco industry, evils that, through litigation, are finally coming fully to light. Philip Morris is hoping that the public and future juries will see its ads and think kindly of the company. Mostly it is hoping that Congress will not enact law that places the drug nicotine under the purview of the FDA.