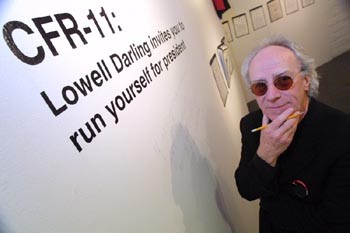 “IF YOU WANT to run for president, it’s as easy as this,” declares internationally known (and infamous) conceptual artist Lowell Darling, as he flamboyantly presses a small green button on a copy machine and grins his infectious smirk. The photocopier whirs into action, a light flashes, and a copied page from the Florida Election Code slides out on crisp white paper.

“This is the first step,” he says.

Darling, 58, clad entirely in black, except for the barely visible red, white, and blue edges on a blacked-out campaign button pinned to his lapel, explains his theory: “If everyone runs for president, every vote would count and be counted,” he states.

The Camp Meeker (rather than Camp David) resident runs a hand through his shock of receding gray hair, then takes a pencil and scrawls that statement across a white wall in the Sonoma Museum of Visual Art, the current site of his “Run Yourself for President” exhibit.

This ultra-sparse exhibition may be a bewildering mystery to some observers. A few may even call it a publicity stunt by someone with a taste for celebrity–or a mere scam masquerading as art.

“Run Yourself” consists merely of packets of paperwork attached along the walls; a table full of election paraphernalia like books and buttons; a video playing on a TV; a 40-year-old tattered black derby hat filled with concrete next to a miniature boxing ring (to signify throwing one’s hat into the ring–if you’re able to lift it); drapes of red, blue, and black bunting–and the photocopy machine.

Of course, those familiar with Darling’s work will surmise that this is a humorous and ironic exhibit designed to provoke thought and question the American electoral process. The paperwork on view is a collection of the red tape involved in running for president. There are documents and application packages Darling amassed from various states and the Federal Election Commission when Darling himself ran for president last year. He subsequently withdrew in dismay because of the seemingly impossible procedures involved.

At the time, Darling’s main motive for running was to point out to American elementary school teachers that they should stop telling schoolchildren that anyone can grow up to be president, because it’s no longer so. “Anyone can’t be president,” he says. “It’s not our vote that elects the president. It’s a handful of campaign finance lawyers who decide.”

He says that, under the guise of political campaign reform, the two main political parties have legislated away this basic right and enduring American dream in the form of CFR-11 (the Code of Federal Regulations for Presidential Elections), which Darling calls a legal land mine.

“Only the candidates with 50 million bucks under their belts that are wealthy enough to hire expensive campaign and finance lawyers can navigate the legally treacherous maze of the CFR-11,” he asserts.

OVER THE course of an artistic career that began after art school in the late ’60s, Darling has been awarded several grants from the National Endowment for the Arts. Among his best-known work is the first artists’ website/exhibit at the Whitney Museum of American Art.

Now the irreverent artist is inviting everyone to run himself/herself for 2004 president: to come into the exhibit at SMOVA, photocopy the necessary paperwork, begin the application process–and basically flood the system.

“How many people can the Supreme Court take on?” Darling asks, eyes twinkling behind amber-tinted glasses. “I’m interested to see where this goes from here.”

Ever the explorer of American culture, Darling has been a tongue-in-cheek politician since 1978, when he ran for governor of California against Jerry Brown and captured some 67,000 (or 2 percent) of the vote. During that time, he created memorable political agit-props in the form of a glove-on-a-stick for germ-free handshaking and lips-on-a-stick for kissing babies.

Darling is a performance artists who plays to the media, a hip jokester whose previous artistic capers over the years have included lacing up a small portion of the San Andreas fault with ropes in order to save California from a major earthquake (a stunt captured by Rolling Stone magazine), and recently campaigning for U.S. president in Europe–where he told people that the office of the president was “too important to be left in the hands of Americans.”

Indeed, This Is Your Life: Fuck You was to be the title of a book that Darling never wrote that summed up his investigation of 20th-century American culture.

Darling has recognized political campaigning as an art form, and he uses video, buttons, paperwork, and humor to make his points. He calls himself a pro bono artist because he often does not produce a salable end-product, but rather a concept-driven work that evolves with public events.

“It’s an organic work,” Darling explains. “Like biology, it keeps changing. Art is not made, it’s willed. You make it happen.”

SMOVA director Gay Shelton compares Darling in some ways to the installation artist Christo because his medium is the news media, and the art itself is what occurs in the media as the exhibit happens.

“Darling gets an idea and makes an art show, but the whole process unfolds as he get more intrigued by current events and it becomes a work in progress,” Shelton says. “That’s why it’s so current.”

In this case, life has seemed to imitate art as the latest election mess outdoes Darling’s satire.

“This campaign was choreographing that campaign,” he says, shaking his head in wonderment. “The real political situation keeps matching this one lunacy for lunacy.”

Darling says he’s actually very happy about the election fiasco. “The country is having a big conversation that it needs–and this is my sentence,” he says, gesturing to the exhibit. “But it’s not a life sentence. Being president is a life sentence.”

But can anyone really become president using his ballsy system?

“Yes,” says Darling, not missing a beat. “If everyone runs, you will be most likely to vote for yourself–unless you have absolutely no self-esteem. And so if you get two votes you could win.

“All you need is one good suit and one good quote.”