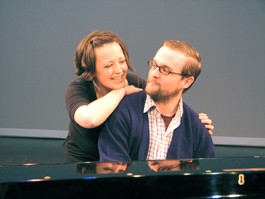 PASCO's 'They're Playing Our Song' a real charmer

An acrophobic, insecure songwriter with a string of hit tunes to his name and a shelf full of awards (Marvin Hamlisch, known here as Vernon Gersch) meets a bright, bubbly, eccentric, chronically late up-and-coming songwriter (Carol Bayer Sager, aka Sonia Walsk) with a penchant for wearing hand-me-downs she cajoles from small theater companies. While writing five songs together and delivering snappy one liners by Neil Simon, this musical odd couple fall in and out and in and out of love, until the end, when they both finally deal with her ex-boyfriend, Burt Bacharach—that is, Leon. An autobiographical musical love story, They’re Playing Our Song first appeared in 1979 and is as light and fluffy and nonthreateningly sexual as an episode of Love, American Style.

In a fresh, pleasing, emotionally grounded new production by the Pacific Alliance Stage Company, this potentially dated show is made relevant by the winning performances of its two strong-voiced central stars (Byron DeMent and Ashley Jarrett) and kept immediate, meaningful and moving by the smart, sensitive direction of Hector Correa. Correa takes what might have been slight, pleasant fluff and makes it real, sharply focused and at times powerfully moving. It clips along at a perfect pace, sounds great in terms of voice and orchestra, and everyone who needs to looks cute in pajamas. This is PASCO’s best, most enjoyable musical in years.

“You can’t sit in a dentist’s chair without hearing one your songs!” That’s how the overwhelmingly weird Sonia praises the accomplishments of her songwriting idol when she meets Vernon at his Manhattan apartment, the same building, we are told, in which Jerome Kerns, Isaac Stern and Leonard Bernstein reside. Simultaneously attracted and appalled, Vernon proposes that they write five songs together, but the working process is almost immediately compromised by Sonia’s tendency to be days late to meetings. Their fits-and-starts romance is slowed by Sonia’s odd relationship with the never-seen Leon, with whom she has broken up but refuses to stop taking care of.

In reality, Hamlisch (“The Way We Were,” etc.) and Carol Bayer Sager (“Arthur’s Theme,” “That’s What Friends Are For,” etc.) were involved for several years in the late ’70s and early ’80s, romantically and professionally. They met when she was still a struggling lyricist, mainly known for having penned the 1965 Mindbenders hit “A Groovy Kind of Love” and for having been married to Bacharach.

In the fictionalized version of their love story, for which the team wrote the enjoyably poppy songs, with Simon contributing the book, Sonia and Vernon each have their own Greek chorus of singing and dancing “inner voices” (pared down to two apiece from the trio called for in the Broadway version). In PASCO’s production, Vernon’s voices are hilariously well-played by a pair of well-known local actor-directors, Gene Abravaya (he sings falsetto!) and John Shillington, while Sonia’s voices are embodied by Laura Pedersen-Schulz (last seen at Spreckels in 2007’s You’re a Good Man Charlie Brown) and Sonoma vocalist Linda Jacobson.

On a nicely spare set by Rose Anne Raphael, with entertainingly choreographed set changes, the cast perform with a live band of capable young players, well-directed by Diego Emir Garcia. The lighting and sound design by Eddy Hansen and Doug Faxon, respectively, complete the polished package (though I’d have like to have heard the “voices” a tiny bit better).

The core of any love story is the lovers, and DeMent and Jarrett succeed in making this couple adorably meant-for-each-other. It is a sign of their skill, and of Correa’s knack for getting to the emotional heart of a play, that I found myself wanting them to get together and stay together, and felt genuine heartbreak when it looked as if they’d never make it.

The story is a rare celebration of human kindness, having at its dramatic heart Sonia’s refusal to abandon her grieving former lover simply because her new lover would feel less threatened that way. More cynical theatergoers might write this show off as an elaborate form of couple’s therapy, but others will recognize it as a charming, loopy homage to the twists and turns of love, and the power of a good pop song to say what we couldn’t otherwise find the words to communicate.