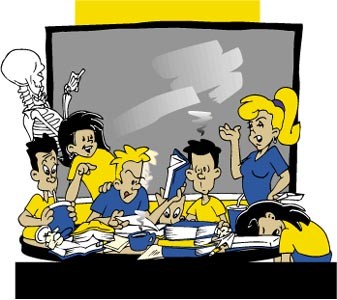 KENT PINGREY didn’t want to spend six weeks of summer vacation and every Saturday hitting the books. What teenager would? But now that the 19-year-old Rohnert Park native is on his way to an engineering degree at San Diego State University, he’s glad he spent his leisure time dissecting pigs and calculating rocket-projectile vectors.

Pingrey is one of almost 1,000 local high school students each year who participate in programs through Sonoma State University that prepare them for an increasingly competitive college-admissions gauntlet.

When Pingrey was in middle school, he was recruited by Sonoma State’s Academic Talent Search, a federally funded program that offers workshops on everything from study habits to self-esteem, the Saturday Academy, tutoring, and field trips.

At Rancho Cotate High School, Pingrey chose to participate in 3-1-3, a joint program with SSU that identifies 30 at-risk ninth graders and enrolls them in rigorous college-preparatory classes. Senior year is a combination of classes at high school and at Sonoma State, which allows most participants to then complete their college degree in three years.

“The program made it so much easier here,” Pingrey says of his first full year at SSU. “I already had a couple of classes under my belt and knew my way around. Some students when they come in, they don’t really even know how to take notes.

“The real benefit is that they make sure you’re on track, that you’re fulfilling the requirements and your grades are good,” adds Pingrey, who has transferred to San Diego State for the fall.

Pingrey, self-assured and motivated, didn’t bother with academic tutors until his senior year, when he was taking calculus at SSU.

“Then I was in there every day,” he says.

THESE DAYS, fulfilling the high school graduation requirements isn’t enough for students who want to go to college. Even good grades and decent SAT scores don’t guarantee admission. To help their chances, students now do summer internships, play sports, and perform community services to show leadership qualities. They take honors courses to boost their grade-point averages. And to show that they can stand up to academic challenge, they participate in pre-college programs like those at SSU.

“It used to be that college was for kids with a lot of brains who could get scholarships or those who could afford it. Historically, it was the rich person’s privilege,” says Gloria Miller, director of pre-college programs at Sonoma State University. “People have recognized that pretty much without a college degree you don’t get a chance at the better-earning jobs. Now people are better off as a whole economically, so college is a possibility for many more people.

“You wouldn’t think with us being in the backwater of Sonoma County we’d be competitive,” Miller adds. “We are.”

KARLA MARROQUIN’S parents hoped that she would go to college, but as recent immigrants from El Salvador, they didn’t speak English and had no idea how to begin to maneuver their 8-year-old daughter through the system. Sonoma State’s academic-talent-search staffers found her in seventh grade and steered her into Upward Bound, a four-year program for low-income high school students who are the first in their family to pursue a college degree.

As part of Upward Bound, Marroquin went to summer school at SSU, enrolled in the Saturday Academy, and attended tutoring sessions every Wednesday after school.

“You grew up in the program. Every Saturday we’d talk, kind of like a support group,” she says. “There was more support than in high school. The [high school guidance] counselor put me in English as a Second Language classes automatically. The Upward Bound staff went around and put me in college prep classes instead.”

Two years ago, Marroquin graduated from Casa Grande High School in Petaluma with a 3.66 GPA, heading in a very different direction from her friends.

“They were going to go to work when out of high school,” says the 19-year-old SSU sophomore, who plans on majoring in economics and going into international relations.

“Most of my friends got pregnant, got married. They have different ambitions than I do now.”