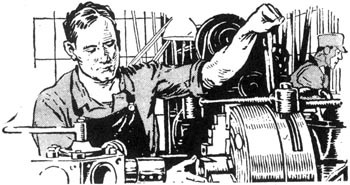 Cave dwellers worked a third as much as modern man. And we call this progress?

AREN’T YOU JUST SICK of working all the time? You put in your 40, 50, 60, or more hours a week at your job, then spend all weekend cleaning the house, mowing the lawn, and doing laundry! Or maybe you’re self-employed, work out of your home, and end up working at your job all the time, day and night.

The average American now spends 47.1 hours per week at a full-time job. That’s up from 43.6 hours per week in 1977, so notes a 1997 nationwide survey of some 3,000 employees by the Families and Work Institute, a New York-based non-profit that addresses work and family issues. Over the course of a year, that’s about four extra weeks spent working.

Do you ever wonder if there is some way to pull our lives back from the work abyss? This era of techno-gadgets–e-mail, cell phones, pagers, faxes, and voice mail–isn’t helping. These things should be making our lives more efficient, freeing up more time for important things like lying on the beach and spending time with our family. Instead, they only make us even more connected to our jobs.

The line between work life and private life is getting fuzzier all the time. For example, the next time a cell phone rings in a restaurant or movie theater, notice how many people automatically reach for theirs “just in case” it might be a business call. In the ’60s and ’70s, stress experts called this kind of thing “multiphasic behavior,” otherwise known as “doing several things at once.”

These days, they call it efficiency.

As a result, we can’t get away from our jobs and are totally stressed out. Our marriages are in trouble, we have no time for our children, and we’re physical and emotional wrecks.

But some companies are trying to help their employees buck the odds by offering stress-relievers, notes an article in the June 7 issue of Newsweek. Companies like AT&T, GTE, and Sprint are letting employees set their own schedules, offering wellness programs like on-site gyms and massages, and providing “get-a-life” coaches– psychologists, gurus, even yoga instructors–to help draw the line between work and personal time. Their job is to help overworked employees maintain some semblance of a personal life in an era where meals are quite often eaten at work and e-mail is returned after the kids are tucked into bed.

Drop-in centers–mini-offices for suburban employees–are another growing trend. Instead of battling traffic through the Bay Area, employees of Sun Microsystems can drive to one of four small branch offices at any hour to plug into the company network. “Sun gets more work out of us, and we get some of our life back,” notes project manager Brent Daniel in the Newsweek article. Daniel gets to skip his hour-long highway commute when he works from the drop-in center near his home.

Then there’s the matter of how much work we should be doing. As human beings, we all must do “some” work for basic survival, but is there a “minimum daily requirement” of work? A number of diverse sources, ranging from primitive culture to modern history, place this figure at about three hours a day.

Marshall Sahlins, author of Stone Age Economics, discovered that prehistoric men hunted from two to two and a half days a week, with an average work week of 15 hours. Women gathered for about the same amount of time each week. In fact, one day’s work supplied a woman’s family with vegetables for the next three days. Throughout the year, both men and women worked for a couple of days, then took a couple off to rest, play games, gossip, plan rituals, and visit.

In From Joblessness to Liberation, Dr. Frithjof Bergmann writes, “For most of human history, people only worked for two or three hours per day. As we moved from agriculture to industrialization, work hours increased, creating standards that labeled a person lazy if he or she didn’t work a 40-hour week. The very notion that everyone should have a job only began [150 years ago] with the Industrial Revolution.”

DURING THE DEPRESSION, free time was equated with unemployment. The New Deal established the 40-hour week, and workers were taught to consider employment, not free time, as their right as citizens.

When it comes to erasing the line between work and private life, baby boomers are partly to blame. They turned their homes into workplaces and started thinking of work in terms of self-fulfillment, contrary to their parents, who were taught by the Depression that any job that pays a good wage was worth keeping. Now our careers begin earlier and end later, reversing a trend that reached its peak after World War II, when child labor virtually disappeared and retirement was a birthright.

According to the Department of Labor, the number of people 55 and older who are still in the labor force has increased by 6 million since 1950. Most of them are women. That number is projected to increase by another 6 million by the year 2006.

A generation ago, economists believed that America was on its way to being an affluent society. More efficient technology was supposed to produce an abundance of wealth that we could enjoy with less and less labor. Things didn’t quite turn out that way, for a variety of reasons, including the Vietnam War and the oil boom of the ’70s, which led to double-digit inflation that sapped the value of wages. A string of recessions, mergers, and downsizing served to crash the economy during the ’80s.

But baby boomers still want to maintain the lifestyle of their parents, which means going deeply into debt. According to an article in the May/June issue of Modern Maturity, about one fourth of the average family’s income now goes to various creditors, more than in any previous generation. These days, in nearly four out of five couples, both partners work outside the home. In 1950, it was one out of five.

Still, the “simple living” trend has been developing steadily over the past decade or so. Some people are just fed up with working all the time and are unwilling to continue sacrificing their family and leisure time for the almighty dollar and expensive toys their neighbors can covet. Many have figured out how to “take back their lives”–like earning less money, buying fewer things, and understanding that “money equals life energy,” a concept embraced in the book Your Money or Your Life by Joe Dominguez and Vicki Robin.

Dominguez and Robin claim that we can take control of our lives and even achieve financial independence by changing the way we think about money. Translated, that means: Is that new pair of $60 shoes really worth six hours of your $10-an-hour job? Wouldn’t you rather spend the six hours playing with your 4-year-old son?

There is, after all, more to life than work.