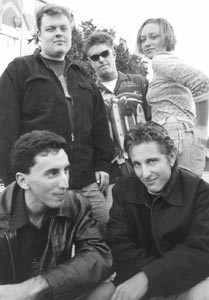 Head trip: Riding the crest of the Internet’s hot MP3 craze, Petaluma-based Headboard may be the county’s best unsigned band.

GO AHEAD–just try it. Try to nail down the five visual artists, actors, musicians, and other local creative types with the biggest potential to make a startling success out of their budding careers. You’d have better luck playing the lottery.

Creativity, after all, is everywhere in Sonoma County. There are those who strive for the big time, hoping to make it into the pages of Rolling Stone, or at least ARTNews. And there are others who aim for nothing more and nothing less than to simply enrich our community’s cultural life with their artistic efforts.

But all excuses and explanations aside, there are some folks on the crowded local scene who seem to exude potential, to sweat it from their pores, to pour it out onto the canvas and the stage. And while recognizing true talent is a treacherous task, leaving it unmarked is worse. Therefore, below you’ll find our list of five local artists to watch out for in the first five years of the next millennium. You’ve already met them in the pages of the Independent, but we think they deserve a fresh look. If you want our advice, don’t take your eyes off these folks, because they’re on the move.

ANYBODY WHO thinks the Unabomber had a point about computer technology will not find a receptive audience in the members of Headboard.

Founded in 1994, the Petaluma-based pop/rap/ska band–which counts everyone from the Beachboys to Public Enemy among its influences–has engaged in serious flirtations with major label success at least twice in its tumultuous history. But now, the five-member outfit is riding to national exposure on the cresting wave of MP3 online music technology, which permits Internet users to download music to their computer.

According to Headboard’s Glen Rubinstein, the band regularly places in MP3’s top 40 lists and has had over a million downloads of their music since they first went online last December. That kind of exposure allowed the band to take a summer break from its usual heavy-duty touring schedule (the musicians played 150 shows last year). Instead of driving across the country, Headboard has been at Grizzly Studios in Petaluma recording a single for a small European label.

But the MP3 exposure does more than sell music: it also puts Headboard’s name in the mouths of recording industry executives.

Headboard begins playing live shows again this fall, and the 23-year-old Rubenstein thinks a major label deal may again be in the works when they play a showcase gig next month at L.A.’s notorious Viper Room. Still, grim experience has taught Rubenstein not to pin his hopes on the mercurial music industry.

“That’s not my primary goal–to get a record deal,” he says. “If it happens, that’s a thrill. If not, we know what we’re doing.”

IT’S AN EASY mistake to make. After the incredible out-of-nowhere success of a dark horse indie film like The Blair Witch Project, you might have the notion that independent filmmaking is as easy as a walk in the park . . . or a hike in the woods. But it just ain’t so, as any number of enterprising dreamers with busted bank accounts and no distribution deal can tell you.

Welcome to the real world, where hard work doesn’t always pay off.

Place in the sun: Filmmakers Phil Flores and Mitch Altieri are aiming for Sundance.

So here’s the question: How do you tell the desperate dreamers from the next big thing? Sometimes you get a feeling, a vibe, an intuition–and Mitch Altieri tends to inspire that feeling more than most. Maybe it’s his easy confidence, or maybe it’s his track record. After all, he won the coveted Bay Area Cable Excellence Award for his first film, King’s River, which he wrote and produced for public television when he was just 19.

In any case, it’s hard to talk to the Petaluma filmmaker, now 26, without getting the distinct feeling that he’s on track to success. For more than a year now, Altieri and his partner, Phil Flores, 27, have run their own production company, American Whitehorse Pictures, while also working on their first feature film, Long Cut, which tells the story of a young girl and the gentle ex-convict who tends horses on her grandfather’s ranch.

Scrapping together even the relatively meager (by Hollywood standards) budget required to shoot the film wasn’t easy. The Whitehorse Pictures partnership had to rely on their own ingenuity and the proverbial kindness of strangers. Altieri is quick to give ample credit to community support: wardrobe items were provided by the Santa Rosa Saddlery, and Two Rock Ranch donated film locations.

Now, the end of the road is in sight. According to Altieri, Long Cut will soon be completed, just in time to submit it to the Sundance Film Festival, the traditional kingmaker in the world of independent film.

“We’re hoping to have a rough cut done somewhere in the next two or three months,” says Altieri, adding confidently, “The boys from American Whitehorse Pictures will be going to Utah.”

IN THE WORK of Chris Finley, the aesthetic of the video game collides with the world of contemporary art. Neither may ever be the same. Of course, the 28-year-old Penngrove painter and sculptor, who takes creative inspiration from the computer games of his youth, is hardly alone in having a unique vision. What sets him apart is that other people like what he sees.

This January the Independent reported that Finley was one of four Bay Area artists accepted into an exhibit at the prestigious San Francisco Museum of Modern Art. Museum-goers who attended the Society for the Encouragement of Contemporary Art exhibit were treated to Finley’s unusual installation piece. Titled Level Three: Buzz No Thank You MMM Pizza with Steamy Crotch Hippitty Hop Head-Butt Moo, the piece was especially notable for its interactive component, which allowed people to head-butt a “hippitty hop” and thus elicit a moo from a painting of two women sunk deep into a giant pizza. Sound weird? Sure, but museum-goers loved it.

Video vision: Artist Chris Finley has his eye on the future.

“I had to replace the hippitty hops several times because people kept hitting their heads on it so much,” Finley explains.

After the SECA exhibit, Finley’s career really took off. A commercial gallery in San Francisco that exhibited his work sold every piece. At the moment, you can’t see Finley’s art locally, but he does have shows coming up in both Los Angeles and New York.

Finley still maintains his studio in a renovated chicken barn in Sebastopol, but that could change if his plans for the future work out.

I think I want to just continue making the quality of work I’m making,” he says, and then laughs. “And, of course, I’d like to get a much bigger studio and hire some assistants.”

SANTA ROSA singer Mayra Carol has all the usual marks of a rising musical talent. She works hard, taking her show on the road to venues across California. She constantly strives to improve both her musical ability and her stage presence. And she’s even been featured on national television.

About the only thing that separates Carol from your average 20-something poised on the brink of success is that she has one heck of a head start. She is, after all, only 13 years old.

But the young mariachi singer–who has performed everywhere from Santa Rosa’s Art in the Park summer concert series to Sabado Gigante, a Spanish-language variety show that attracts some 100 million viewers around the globe every week–demonstrates more maturity than a lot of musicians two or three times her age. She’s even pressed a CD, called Mensajera del Amor, Spanish for “Messenger of Love.” Take that discipline, add in an ample amount of natural talent and a supportive family, and combine it all with the music industry’s current red-hot interest in the Latin music trend, and it’s clear that Carol is in the right place at the right time.

Of course, the teenage singer probably has a few other things on her mind besides honing her already remarkable voice–like school and growing up. But her many local fans would hardly be surprised to see her move onto the national stage for good. They only hope she sticks around a while longer.

FOR ACTOR-playwright Bryan Bryson, the wood of the stage is proving to be a springboard to success. The 30-year-old Santa Rosa resident has long maintained a fruitful relationship with Actors’ Theater, playing lead roles in such plays as Arcadia. But last January saw his career reach a point of departure with the successful debut of his solo theaterwork, Romance: A One-Man Show, in AT’s Bare Stage Series.

A philosophical comedy, Romance details the exploits of the brass-balled Mr. Billman, president of a video dating service, who sends a zealous matchmaker to spark amour between a Zen-head drug addict and an ex-erotic dancer. Bryson not only wrote the play, but also played all the parts, integrating video monitors and a bit of cross-dressing to deliver an exciting performance that provoked rave reviews from audiences and critics alike.

Now the actor is taking his show on the road. He’ll be restaging Romance at next month’s San Francisco Fringe Festival.

So what’s the secret to his success?

“I think what gives me the edge is the fact that I’m allergic to lawn furniture. Since I was a kid I’d break out into a rash–I can’t be around the stuff,” quips the irreverent Bryson. “I’ve got a thumb on my right foot.”

“Some people like to do crossword puzzles and go skiing–I like to do theater,” Bryson finally admits.

Daedalus Howell contributed to this article.