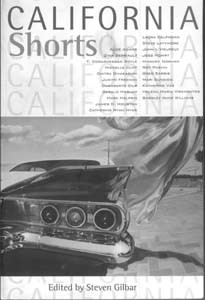 WHEN YOU’RE stuck smack-dab in the middle of it with some 33 million-odd other people (and some of them are very odd indeed), it’s easy to forget what a strange place modern California really is. What census report, what demographic profile, what bar graph or pie chart could ever do justice to the momentous–and, for some, catastrophic–collision of cultures, people, and ideas that has produced this place we call home?

None can, of course. As Steven Gilbar, editor of California Shorts (Heyday Books; $15.95), puts it in his introduction, our sun-kissed land is more “a state of mind than a state of the union.” In the face of California’s diverse wonders and multitudinous nightmares, social science gets hopelessly lost, and human imagination must step in with a literary road map.

To that end, Gilbar has assembled this eclectic collection of short fiction, pulling together 22 previously published stories from some two decades of literary labor by some of the state’s finest contemporary authors, including such luminaries as T. Coraghessan Boyle, Sonoma County’s own Gerald Haslam, and the recently deceased Alice Adams.

These are stories with a firmly rooted sense of place, whether it’s the sun-blasted Sacramento River delta, the cottage-cheese-bland suburbs of Los Angeles, the forested slopes of the Trinity Mountains, or the familiar streets of Santa Rosa. The characters who prowl these environments are just as diverse: they range from skateboarding street kids to Indian immigrants to cougar-hunting cowboys.

In one of the collection’s best stories, “The Pacific,” the protagonist is a lonely young woman welding airplane parts in a World War II factory while waiting for her husband to return from battle overseas. Author Mark Helprin turns a description of the factory floor into pure poetry: “Through the dark glass of the face plate the flames in the distance were like a spectacular convocation of fireflies on a hot, moonless night. With the mask up, the plane of the work table looked like the floor of the universe, the smokey place where stars were born.”

Short-story aficionados will find much here that is familiar. For instance, many readers will have already encountered “The Magic Pony,” the searing story of two young girls growing up in deeply dysfunctional Indian families in Santa Rosa. But the story, taken from Greg Sarris’ award-winning 1994 collection Grand Avenue, has all the more devastating power coming, as it does here, after Ray Parvin’s “A Dream She Had,” a fairly lighthearted fable about infidelity testing a marriage in the mountains.

The wonders don’t stop there. Michelle Cliff’s “Apache Tears” takes an eerie look at a morbid museum in an L.A. suburb. In “Clothes,” Indian-American author Chitra Divakaruni offers a tragic tale of love and ambition set mostly in a 7-Eleven.

It’s deeply appropriate that the twin tensions of race and class figure prominently in California Shorts. Suburban homeowners try to recover their dog and their dignity from a Mexican-American gardener in “The Rake People.” A young Portuguese-American woman dispossessed by the parish priest plots a stunning revenge in Katherine Vaz’s “Original Sin.”

Of course, it’s only natural that a collection this eclectic offers a few disappointments. Indeed, early on, California Shorts presents a remarkably unremarkable story about the adventures of a lonely fire-spotter from the usually far-from-commonplace T. Coraghessan Boyle (author of Riven Rock ). Far worse is Laura Kalpakian’s cliché-ridden portrait of a deranged Vietnam vet in “Veteran’s Day.”

Then there’s the train wreck: If a mediocre grad student’s dissertation on evolutionary psychology had a head-on collision with a bodice-ripping romance novel, Catherine Ryan Hyde’s “Castration Humor” would be the mangled body pinned beneath the resulting wreckage.

The editor of California Shorts doesn’t claim to have assembled the very best of California’s fiction, and it’s probably a good thing. Although there are many fine stories included, some of the featured authors have written better work than is presented here. But the collection does have a special strength: Way out on the western edge of the continent sits a potent but peculiar land, and California Shorts offers brief but penetrating glances at its diverse wonders.