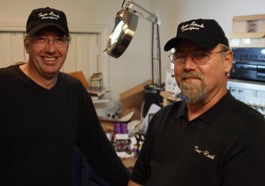 T alking tone with guitarists is a lot like talking flavor with wine connoisseurs. Physical terms like “round,” “warm” and “meaty” become audio concepts and excited sentences with flamboyant hand gestures take over the discussion. It’s nature’s ultimate sonic conundrum: tone is the most important element of a guitarist’s sound, yet it’s also the most elusive, and just as serious winemakers crave the perfect crop, serious guitarists spend years searching for the perfect tone.

For many guitar gods, including John Mayer and Carlos Santana, that search has ended at a small shop in Rohnert Park: K&M Analog Designs, the makers of Two-Rock tube amplifiers.

Two-Rock amplifiers are making waves in the modern world through largely old-school methods. Every amplifier is built from scratch in the company’s shop. Hand-tested components are assembled via hand-wired point-to-point soldering, and the finished product undergoes rigorous testing before final approval. “We’re a very 1923 Ford Motors kind of company,” laughs co-owner Bill Krinard.

Krinard and his partner, Joe Mloganoski, both in their 50s, first met in the late 1980s. Mloganoski was doing TV and VCR repair in Point Reyes, and Krinard worked on amplifiers and guitars at Zone Audio in Cotati. Mloganoski, a musician, struck up a friendship with Krinard. They’d talk shop, find vacuum tubes for each other and eventually they started to discuss modifying amplifiers. “And that’s when it got interesting,” Mloganoski says.

At the time, offshore mass-production was widespread in the guitar amp industry. Printed circuit boards and automated assembly were the norm, and Mloganoski and Krinard agreed it was a shame. “That does nothing for the way an amplifier sounds,” stresses Mloganoski. “It makes it very sterile, it makes it very generic; it makes it very inorganic, really. The best stuff out there is hand-built stuff from the ’60s, and we really wanted to duplicate that.”

With just $600 in cash and “no idea what the hell we were doing,” Krinard and Mloganoski drew a cardboard paper-doll template, paid a Petaluma metal shop to craft an aluminum chassis and built 10 early amplifiers out of spare parts in Krinard’s garage, near the town of Two Rock, in 1999. One of them found its way to Carlos Santana, who loved the amp so much that he immediately took it out on tour for his megaselling Supernatural album. The Two-Rock horse was out of the gate at top speed, and with Krinard as the technical-minded wizard and Mloganoski as the business-minded musician, K&M bolted headlong into production.

More high-profile endorsements soon followed. After coming across some Two-Rock amps at New York dealer, John Mayer contacted K&M directly; the Grammy-wining guitarist sent them his credit card number and began buying everything the company produced. “We’ve got a really great relationship with John,” Mloganoski beams. “He’s a really great guy, really down to earth, and he loves our stuff.”

With Mayer’s support, Krinard put together a John Mayer Signature amplifier, using the guitarist’s style and his prior feedback as his design guide. Mayer stopped by the Rohnert Park shop earlier this year to test-drive the amp (there’s a clip of the visit on YouTube), and after a few tiny adjustments at the shop, Mayer was floored. “We changed parts here and there while he played it,” Mloganoski says, “and when we were done he was like, ‘Oh my God, this is it! ‘”

K&M made just 25 of the amps; priced at $8,500, they sold out in two months. Mayer’s endorsement boosted the company’s visibility, and K&M went from a $600,000 company to a million-dollar company in one year. “Our artist agreement with John is very simple: unlike other companies, we’ve never given away our amps. He’s happy to buy them,” says Mloganoski.

“We give John the ultimate support we give all our customers,” Mloganoski continues, “which is no matter what, we take care of your stuff.” When Mayer’s in the Bay Area on tour, Krinard services and re-tubes not just his Two-Rock amps but all of Mayer’s other gear as well. “He’s got a bunch of Dumble [amps] that are really rare and expensive,” says Mloganoski, “and we’re the only guys he trusts with those.”

For the actual innards of the amplifier, it’s off to the assembly room, where hundreds of boxes filled with raw materials line the walls. The three employees sit at workstations, soldering tube sockets, switches, front panel controls and transistors together with carefully stripped and twisted wire. Poised over the chassis, they meticulously arrange a collage of components while medical tubing attached to the soldering irons sucks away the fumes. It’s a far cry from the mass-produced wave soldering used in most mainstream amp production.

Mloganoski pulls a handmade preamp subassembly off the wall. In a tactic of secrecy, most of its components are concealed on the bottom of the circuit board, instead of the top, to derail potential clones. Websites have popped up discussing how to copy Two-Rock’s sound, and preserving the “secret formula” is key in the small handmade amplifier world. “Everybody wants to be Two-Rock, so we hide all this stuff underneath,” Mloganoski says. “You have to take the whole amp apart to find out what’s in there.”

Whereas most electronic devices come directly off an assembly line and into a box for shipping, Two-Rock amps get thoroughly tested before release. Once the amp is assembled, it’s plugged in and left on for 48 hours on a shelf in Krinard’s “mad scientist” room; a tangle of tools, wires, and old-time electronic measuring devices. Krinard gives each amp a thorough technical checkout, and Mloganoski plugs in and plays each amp, both before and after it’s inserted into its wooden cabinet, listening carefully for the almighty tone, a concept that Mloganoski calls “highly subjective.”

“Not everybody hears everything the same way,” he says. “There are so many variations, you can’t say there’s the Tone. But the reality is that there’s always going to be a set of people who are either cursed or blessed with better hearing than everybody else, and they’re really going to be able to hear the differences. And they’re going to want to find this thing that’s in their head, sonically.

“There are a lot of people who probably can’t appreciate really fine wines if they don’t have the palate for it,” he adds. “To them, that $20 bottle of Merlot tastes every bit as good as that $50 bottle, but these other people are going, ‘How can you drink that crap?'”

“It turns out,” adds Krinard, “that it’s not only how it sounds, but how does it feel ? That’s a huge part of it.”

Frank Hayhurst of Zone Music has seen decades of guitar-tone growth in the North Bay. “Just like Silicon Valley is leading the world in computers,” he declares, “we’ve got more tone up here than anywhere else on the planet!” If you’ve already got a guitar but are looking for the next level of sound, here’re a few of the local products that can sweeten, fatten, thicken and hard-boil your tone.

MESA/Boogie World-renowned manufacturers of bass and guitar amps, with nearly 500 artist endorsements ranging from Prince to Metallica. The North Bay’s most famous amp maker, MESA/Boogie has been based in Petaluma since its inception in 1970. 707.778.6565. www.mesaboogie.com.

EMG Pickups Widely revered pickups made in Santa Rosa and used by Les Claypool, Nickelback, Metallica and David Gilmour, among many others. In business since 1974, EMG specializes in both active and passive pickups. 707.525.9941. www.emginc.com.

Voodoo Lab Creators of “scary good tone” with cool-sounding pedals ranging from the “Wahzoo” to the “Microvibe.” The Santa Rosa&–based company also makes power boxes, controls and preamps for a roster of artists over 150 strong. 707.545.0600. www.voodoolab.com.

ToneCandy Handcrafted overdrive, boost and distortion pedals made in Santa Rosa and built with a “Fat-4” knob for maximum versatility. Don’t be fooled by the unassuming size; these small red boxes work wonders. [ http://www.tonecandy.com ]www.tonecandy.com.