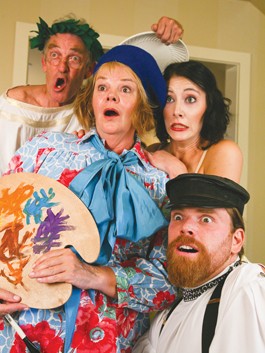 When You Can’t Take It with You first appeared on the American landscape in 1936, the country was in the grip of the Great Depression, as are the various eccentric characters in Moss Hart and George S. Kaufman’s Pulitzer-winning comedy. Though truly a product of its time, with scads of references to then-popular New York landmarks, the Russian Revolution and various political occurrences of the day, You Can’t Take It with You has remained accessible and entertaining as many of its contemporaries (Zoe Akins’ The Old Maid or Sidney Kingley’s Men in White , also Pulitzer winners of the day) have all but faded from memory, too timely to remain timeless.

What makes Kaufman and Hart’s masterpiece so enduringly lovable is the way it transcends its own era. At its heart—and what a big, open heart it is—this is a show not about 1930s America, but about the goodness and love that can thrive in families if they are brave and bold enough to just be themselves. In a delightfully crisp, uncluttered new production at Santa Rosa’s Sixth Street Playhouse, director Charlie Queary sets the perfect pace and tone for the play as the off-beat Sycamore family goes about its various daily rituals.

Grandpa (a first-rate John Craven) is an extremely contented man, having given up work for a life of collecting snakes and attending college commencement ceremonies. His daughter Penny (Kate Brickley), who writes bad plays because a typewriter was once accidentally delivered to the house, is the slightly scattered matron of a large extended family. Her husband, Paul, played with conspicuous enthusiasm by the great Joe Winkler, makes a living building fireworks in the basement, assisted by the odd but amiable Mr. De Pinna, a former ice-man who made a delivery to the house one day, and for some reason never left.

The Sycamore’s youngest daughter is Essie (played with blissful giddiness by April Krautner), a would-be dancer (she never stops dancing), who is married to the pleasantly baffled amateur printer Ed (a fine Peter Warden, known for his offbeat performances in experimental plays; based on his performance here, he should do more of this kind of thing). Ed assists Essie in her part-time candy-making business, printing random quotes to place in the boxes he then delivers. Popping in regularly is Essie’s Russian dance instructor, Mr. Kolienkov, played with light-the-block electricity by Keith Baker, once again proving his chameleon-like abilities.

The Sycamore’s other daughter is Alice (Taylor Diffenderfer), the only member of the family who believes things aren’t quite “normal” at home. Though never doubting her family’s devotion to one another, she longs for a family like others. The plot is peppered with small conflicts, including the discovery that Grandpa has never paid income tax (“I don’t believe in it”) and now owes the government $20,000. Additionally, Ed believes that mysterious men have been following him, a fear that turns out to be correct; evidently, the FBI has become suspicious of the simplistic notes Ed includes in those candy boxes, believing them to be pro-communist code.

The major conflict in the play, comes when Alice brings her Wall Street fiancé, Tony (Lowell Weller), home to meet her parents, and a misunderstanding about the date results in Tony’s uptight parents arriving for dinner on the wrong night. The resulting collision of personalities threatens to doom the nuptials, despite the fact that Tony believes the Sycamores to be far saner than his own status-seeking mom and dad.

Pleasantly daffy and remarkably subversive for its time, the chief delight in You Can’t Take It with You is how well-suited its themes are to today. In a world where monetary success and instant fame are the primary pursuits of the culture, this sweet-hearted, very funny play is a strong reminder that love, satisfaction and human affection are far better indicators of success than the number of zeros at the end of one’s bank balance.