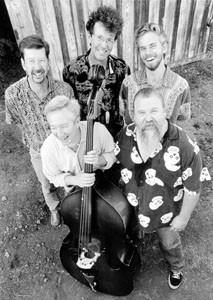 The Waybacks ride back to the North Bay

Their shows are legendary, and that legend just keeps on growing. Fresh from their first date at the largest bluegrass festival in the United States–where the band shared the stage with new-grass greats Darol Anger and Mike Marshall and was introduced by the festival announcer at an encore performance as “the hottest debut band at Merlefest”–the San Francisco-based Waybacks are back with a new album (Burger after Church) and an upcoming date at the Rancho Nicasio.

This quirky acoustic quintet, dishing up what they like to call (with tongue planted firmly in cheek) “that high, loathsome sound,” is an irreverent round-up of “crabgrass” music, countrified humor, and virtuoso licks that has led to a cult following coast to coast. It’s all about virtuosic flatpicking, fingerstyle, fiddle, and mandolin, sowed with an exuberant joie de vivre.

“The group’s air-tight arrangements swing with fervor and intensity, spotlighting spine-tingling vocal harmonies and some of the hottest instrumental playing you are likely to hear on either side of the Rockies,” opines Steve Barker of the Freight & Salvage nightclub in Berkeley.

While their stage antics are all about fun and their albums are rife with irreverence (their 2000 CD Devolver–which Acoustic Guitar magazine hailed as “an album that no fan of modern string bands should miss”–chronicled the descent of man), the Waybacks are strictly serious about their sound. Lead guitarist, mandolin player, and singer James Nash, who also plays with Lane and the Badass Chicken Bones, studied with Nashville session regular Jerry Kimbrough.

Fiddler, mandolin player, guitarist, and singer Chojo Jacques is a longtime contributor to various new-grass bands and honed his chops playing with the Lost Highway Band, who recorded their first album on Augie Meyer’s Texas Record label. He has performed or recorded with Ramblin’ Jack Elliott, Frank Wakefield, Johnny Paycheck, Michael Hedges, and others.

Guitarist Stevie Coyle taught himself to fingerpick while touring with the Royal Lichtenstein Circus. He is a TV commercial actor, a standup comic, and former member of the Foremen (a satirical folk group that fired well-placed barbs at the nation’s leaders circa 1994).

Standup bassist Joe Kyle Jr. has contributed to the amazing Hot Club of San Francisco (the Django Reinhart-Stephane Grappelli-inspired ensemble), as well as the North Bay-based Trailer Park Rangers and Bone Cootes and the Living Wrecks.

“The Waybacks are a string band that long ago surpassed the pinnacle of technical prowess on their respective instruments,” noted online guitar-music magazine Minor 7th (www.minor7th.com), “thereafter ‘devolving’ to a point that their music is so free and natural that the most primitive brain centers of the Homo sapiens listener goes into electrical storm.”

Kinda gives ya goosebumps–a remarkable assemblage of traditional musicians, to be sure.