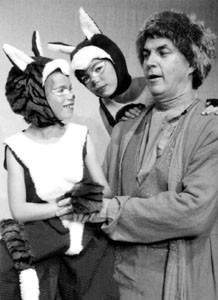 In The Cunning Little Vixen, Czech playwright Leos Janácek composed a paean to nature and its consolations for mortality. Under Elly Lichenstein’s direction, the Cinnabar Theater’s production captures much of the magic, humor, and mood of the opera–a product of Janácek’s old age and passionate, one-sided love for a younger woman. Supported by Nina Shuman’s musical direction of Donald Pippin’s new English adaptation, the Cinnabar Theater deserves much praise for mounting a difficult and challenging work and for bringing it off so well.

The opera was inspired by an illustrated 1920s newspaper serial that depicted the adventures of a young vixen (a female fox) raised by a forester. Janácek created both an allegory and parable out of a simple tale of comical misbehavior, transforming juvenile caricature into pantheistic celebration.

In Janácek’s version, the vixen suffers from lack of love, desiring its transformative power. The vixen (a kittenish and mischievous Wendy Loder) rejects the family dog’s advances, attacks the farmer children who torment her, and, when threatened with a beating for killing the chickens, bites through her leash and escapes into the forest. Once free, she appropriates a badger’s hole, finds a proper fox mate (the elegant and eloquent Eileen Morris), and happily raises a family. A poacher (sympathetically portrayed by Kevin Simmons) kills her for stealing his chickens, and in the final scene, her pups reappear on the forest floor in a reprise of the opera’s opening act.

Janácek had earlier set to music Ozef Kalda’s “Diary of One Who Vanished,” a poem about a farmer’s son fatally enticed into the forest by a gypsy girl, away from the parents he loves and the settled future to which he was born. To Janácek, the gypsy image is the link between town and forest; she is civilized man’s connection with Eros and represents the fulfillment of love.

In The Cunning Little Vixen, a gypsy named Terynka–discussed but never shown onstage–becomes the romantic focus of three aged friends drinking themselves into candor in a tavern: the parson (a stolid, thick Stan Case, doubling humorously as the badger), the schoolmaster (made woeful and clueless by David Phillip, who doubles as the submissive family dog), and the forester (an assured William Neely).

The parson sheltered the gypsy and is being driven away by the angry villagers who believe he impregnated her. The schoolmaster adores her from afar and wants to marry her. The forester, numbed by a stale marriage, recognizes the gypsy in the vixen he captures and as the visitor in his dreams. She embodies amoral love and primordial earthiness, two qualities necessary to these men’s souls. In the end, only the forester will win her–philosophically speaking–and then only through renunciation of his will. The two females who do appear on stage–the morally lax bar maid and the forester’s shrill wife (Bonnie Brooks’ exaggeration of these stereotypes is appropriately dismaying)–represent the inadequate range of female succor.

“The story of the vixen is a forest idyll,” Janácek wrote to his publisher in 1927, “only a hint should surface of the sameness of our cycle and that of animal life. That is enough.” Janácek has made it enough. The airy and otherworldly quality of the opera is the creation of the Cinnabar Young Repertory Theater, dressed and dancing as insects and animals. Megan Watt’s choreography and Greek chorus of a dance as the dragonfly complement the music. The costumes, designed by Lisa Eldredge, are extraordinarily imaginative, and the makeup (also by Elly Lichenstein) is genius. Special note must be made of the forester’s wife’s comical chickens (members of Petaluma Sings!) who toddle down a ramp to ridicule the vixen for not being productive, as they are.

The most effortless-seeming works of art are often the result of years of enormous and painful development. This opera was Janácek’s swan song, the culmination of years of unceasing efforts to transpose human and nature’s sounds into their musical equivalents. It was inspired by his love of the forest of his childhood, his folkloristic interests and humanistic sympathies, as well as by his wide readings in aesthetics and psychology.

But above all, it was ignited by passionate love. He requested that the last act be performed at his funeral, and the forester’s concluding song–“When evening arrives / I welcome the rays of the setting sun / Spring comes once again . . . / and flowers will drink the tears of May-time . . . / and all the joy of Heaven will unfold”–summarizes the composer’s ethos and consolation.