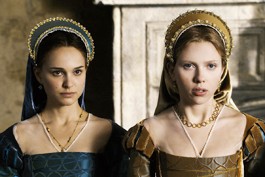 'Other Boleyn Girl' traces girls who would be queen

There’s a satisfying actor’s duel in The Other Boleyn Girl between Scarlett Johansson as Mary and Natalie Portman as Anne of the Thousand Days. Corsets grievously squash Johansson’s curves, and her golden hair is besnooded, or covered with those little birdhouse roofs the fine English ladies of the Tudor era chose to wear on their heads. Natalie Portman wins handily, making a fine Vulcan scowl in the latter half of the film, to indicate her embrace of power politics.

Eric Bana has more stomp in his step as Henry VIII than he had playing the Hulk; the castles seemed to shake under his footfalls. (That particular king is a choice part for any actor—even Homer Simpson was once seen courting the blue-haired “Margarine of Aragon.”) Bana’s Henry is young and desirable, with good muscles under his ermines. But he is a monster of fickleness, and not at all a subtle lover. Henry’s courtship of Mary Boleyn consists of a single word: “Tonight.”

Like a bull, he’s not to be interfered with during rut. That interference is the essence of Anne Boleyn’s mistake in this version of her story. Based on the popular novel by Philippa Gregory, The Other Boleyn Girl shows the problem with the principle “true love waits” (for marriage, that is). Certainly, the expression “Till death do we part” meant something different to Henry VIII than it did to most husbands.

The film shows the background of the climbing Boleyns, whose uncle was the sinister Duke of Norfolk, Thomas Howard (David Morrissey, bouncing back nicely from some unfortunate work in The Reaping and Fatal Attraction 2). Under his guidance, his niece Anne is raised as a dainty dish for the king. His majesty is married, though, to Catherine of Aragon, the Spanish queen who won’t come up with the requisite heir and a spare. Ana Torrent is a good Catherine, handsome but not haughty, correctly playing the queen as one of history’s unfortunates. Not quite so watchable is Kristin Scott Thomas as the mother of the Boleyn sisters and as full of predictions of doom to come as all the dowager queens in Shakespeare’s Lancastrian cycle wrapped into one.

Director Justin Chadwick has been a longtime British TV director (Bleak House, etc.). The budget shortfalls show, particularly in an off-screen hubbub to represent how the public feels about the king getting rid of their religion in order to divorce Catherine and marry Anne. The scenes have enough clarity, though, and the cast overcomes most if not all of the slow learner’s class lines that pop up. But Chadwick neglects the parvenu side of the Tudors. Henry’s fretting about an heir makes a little more sense if you’re reminded that decades of civil war had occurred over the line of succession, not long before this king’s own birth.

The camera work on The Other Boleyn Girl is the true drawback. Chadwick seems determined not to be Masterpiece Theater&–ish, even at the risk of visual illegibility. This is partially the fault of critics, who are always bemoaning Masterpiece Theater compositions in costume dramas. At least those simple compositions are clear. Trying to avoid a static, too formal world, Chadwick goes for an eclipsed lens, as if all the scheming was seen from behind a curtain or through leaded glass. The camera lurches from pillar to post, and it always seems to have its hair in its eyes.

‘The Other Boleyn Girl’ opens everywhere on Friday, Feb. 29.