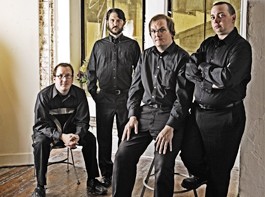 Cursive break out of their screamo box

T he Omaha quartet Cursive’s artistry and acclaim have grown steadily since the band formed in 1995, making them one of the 21st century’s most consistent critical contenders for the title of indie rock’s Great White Hope. But that doesn’t mean they can’t still enjoy the simple pleasures of the rock life.

“I just love our gear,” guitarist and vocalist Ted Stevens says, “and I’d rather drive with it every night then risk losing it.” By way of rental car, the band returns to the Phoenix this Saturday as part of a short West Coast trek built around a highly anticipated appearance at San Francisco’s Noise Pop Festival. Just don’t call it a tour. “It’s not so much a tour as a flight to California, then a series of gigs,” Stevens says.

Consciously trying not to burn out with extensive touring, Cursive are in continued support of 2006’s Happy Hollow, their most unified concept album yet with a state-of-the-union lyrical view that contrasts the heartwrenching navel-gazing of previous records Domestica and The Ugly Organ. With songs like “Dorothy at Forty” and “Flag and Family,” the album’s dissection of small-town America’s disillusionment and hypocrisy have earned Cursive favorable comparisons to Springsteen, and its ubiquitous five-piece horn section has all but killed any inadequate emo pigeonholing. The band headlines Petaluma’s Phoenix Theater on March 1.

“We’re definitely getting to a point where we’re going one direction and people are either going to take that road with us or decide it’s not for them,” says Stevens who, in addition to lead singer Tim Kasher, writes the band’s material. Their productivity has already birthed 50 or so unreleased songs that will debut at upcoming shows, where they’ll be joined by a sax/flute/organ player to replicate their expanding sound.

“The new songs are only similar to Happy Hollow in the fact that they’re probably as drastic a change from anything we’ve done, ” Stevens says with a laugh. “I think people who understand the shifts the band has taken from album to album will expect it from us, hopefully. Tim’s got a new one called ‘Caveman’ that I like; it’s got more of an Elvis Costello vibe to it.”

As for his own musical progression since joining the band in ’99, the ever-humble Stevens, also of the recently reformed Mayday, remains true to form but appreciative of Cursive’s benefits. “I don’t think of myself as a good player, and I feel it’s taken me a couple of decades to make some progress with the instrument,” he says. “Maybe I lack the motivation personally, but the band keeps me playing the guitar a lot. I can’t say I’d ever play this much guitar if the band didn’t tell me to.”