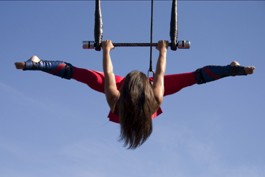 The Show Won’t Go On

With the return worker exemption having lapsed last fall, will Congress let the circus die?

Under the big top, trapeze artists soar through the air, tightrope walkers defy gravity and motorcyclists speed upside down inside the steel-cage Globe of Death. Spotlights, wires and posts, strung together for children of all ages fueled on a two-hour diet of cracked peanuts and cotton candy, fill the enormous tent while clowns and gymnasts wow the crowd. And under the big top, workers assemble and reassemble the entire circus from scratch every few days, bringing the show to a new town.

But this year, the only thing under the big top is a patch of weeds. The once-towering Circus Chimera tent sits lumped in a bundle in James Judkins’ backyard, a lonesome reminder of the stalled legislation needed to get the circus back on the road. The 2008 season for Circus Chimera, Judkins hates to say, has been cancelled.

Along with carnival companies that provide midways to county and state fairs across America, every traveling circus in the country dependent on foreign performers has been disabled by political grandstanding during a hot-button immigration era. Yet none of their performers or laborers are actually immigrating. This is sad news for North Bay circus lovers among the hundreds of towns where Circus Chimera has set up tent and distributed popular two-for-one admission coupons each year. A traveling circus with no animals, Circus Chimera’s elaborate productions consistently combine old-fashioned show business spirit with high-kicking world-class talent.

Like many other circuses and carnivals across the country, Circus Chimera is composed of seasonal performers and workers from around the world, and Judkins says that he has always made sure that everyone in the show comes to the United States with legal work visas. Unfortunately, a key provision for returning workers expired last year, and not one of his regular employees was able to acquire the usual temporary visa to work this year’s circus. As in years past, the provision came up for extension, but Congress, facing a full table right before the Christmas break, failed to act, allowing the provision—and the circus—to fade away.

“The people in the show are my family,” Judkins said last week, speaking from his home in Texas. “It’s put me in a serious depression for quite a while. I’m working on other things, trying to get reorganized for the future, but it’s hurt a lot.”

A staffer at Helm & Sons, the organization that supplies the carnival midway for the Sonoma County Fair each summer exclaimed bluntly, “It’s killing us!” before promising a return interview call that did not arrive, despite repeated prompts, by press time.

For his part, Judkins is currently focused on meeting with lawmakers and getting legislation underway, but it’s apparent that the big top is in his blood; he’ll scramble in any way possible to keep the show on the road. He’s considered scaling back his circus, perhaps buying a smaller tent, maybe visiting fewer towns. It’s not that the crowds aren’t there, he says; it’s that the nature of circus work simply isn’t attractive anymore to an American workforce.

“I ask people,” he says, “if they’d want to travel on the road for eight or nine months out of the year, moving to a different town three times a week.” So far he’s found no takers. Judkins himself joined the circus 33 years ago for a summer job in college, but notes that times have changed. “Now, college students, they do internships, they take summer classes, everybody’s so busy. Nobody has the time or the energy to do something like this.”

Since its inception in 1990, the H2-B visa program has allowed for a maximum of 66,000 temporary work visas to be granted each year to seasonal workers from other countries. Over the years, this cap has never risen proportionately with a growing economy. Demand for the temporary visas increased annually until 2003 when the cap was reached for the first time, putting many American businesses in peril.

Lawmakers swiftly scrambled to provide a way for seasonal workers to continue to return legally.

Three years ago, Sen. Barbara Mikulski, D-Md., and Rep. Wayne T. Gilchrest, R-Md., introduced the H2-B return worker exemption, a provision stating that temporary workers who had previously worked legally in the United States—paying taxes, abiding all laws and returning home—would be exempt from the national cap of just 66,000 visas. Renewed in 2006, the bipartisan provision was widely utilized until September of last year, when it expired and left many businesses strapped for employment.

“Basically they’re holding us, and everybody else, hostage for Comprehensive Immigration Reform,” Judkins says, “for the ‘greater good,’ as they say. Which, to me, makes absolutely no sense. Businesses are closing down and letting American workers go, at the same time Congress is debating an economic stimulus package! It just doesn’t make any sense at all.”

Meanwhile, approximately 50,000 workers who’ve previously taken advantage of the return worker exemption are out of work. Circuses and carnivals in particular face a crucial timing issue in that applications for the remaining visas cannot be filed until 120 days before the work starts. For the circus season, this means Oct. 1—and by that time, all of the visas will have been snatched up. (Having a circus in December is highly impractical, Judkins says, due to weather and attendance issues.)

Circus Chimera’s seasonal employees, many of whom have been with the circus for nearly a decade, have since struggled to re-enter a tight labor market in Mexico. With an unemployment rate near 50 percent and the pay topping out at $100 a week, it’s a far cry from the $600-$700 per week plus meals and lodging that the circus provided.

“They’re just sort of bewildered, too,” Judkins says, “You tell ’em, ‘Let’s do it the right way. Don’t come across illegally. Do it right, we’ll get your visas.’ And all of a sudden, this year, they can’t grasp why, when they’ve done everything right, they can’t come back.” Judkins says that some of his best circus workers, with whom he stays in constant contact, are picking oranges or working at a bank for $80 a week. One of his men has even taken to selling fish door-to-door.

Judkins has traveled to Washington, D.C., four times to meet with lawmakers, and they all say the same thing: they’d vote to extend the return worker exemption in a heartbeat. After all, it’s not just the circus and carnival industries that are hurting; the restaurant, landscaping, agricultural and hospitality industries have relied overwhelmingly on the return worker exemption as well. “We couldn’t find any congressman or any senator,” Judkins reports, “who said it was a bad program, that they wouldn’t vote for it.”

But political bickering surrounding the hot button immigration issue has stalled the process. Nancy Pelosi, honoring the Congressional Hispanic Caucus’ wishes, wants the return worker exemption folded into yet another bid for Comprehensive Immigration Reform. (Pelosi’s office did not return repeated calls for comment on this story.) When that will finally pass is anyone’s guess, and meanwhile Judkins’ tent sits rumpled and unused, denied its reason for existence: keeping a great American entertainment tradition alive.

More than anything, Judkins wants to see Circus Chimera and others like it back on the road. “I just love it,” he says. “I like to travel, I like to see the crowds. You get a great deal of joy out of it. When people come out to see the show and you hear ’em clapping and stomping their feet and having a good time, you feel like you’re doing a good thing.”