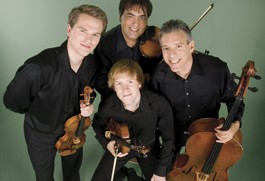 Cream of the Crap

T he full-bodied tone, the rattle of the large reed, the layout of the keys—these and so many other key ingredients in John Coltrane’s forcefully expressive quality were inextricably tied to the tenor saxophone. So why, then, would anyone try to adapt Coltrane’s music to a different format—especially one as staid as a string quartet?

For Coltrane fans, it’s pretty funny to hear the Turtle Island String Quartet’s A Love Supreme: The Legacy of John Coltrane, in the same way it was maybe funny to hear Strung Out on OK Computer: The String Quartet Tribute to Radiohead seven years ago, and in the same way that it’s not funny at all to pore through the outright mercenary and novelty glut of string-quartet tributes recorded since then. The guilt-by-association factor alone should steer anyone away: when even low-rung losers like Hawthorne Heights, Jessica Simpson and Barry Manilow have their own string quartet tributes, throwing Coltrane in the mix is not just bad timing, it’s contextually insulting.

Don’t tell that to the members of the Turtle Island String Quartet, who undeniably, sincerely adore Coltrane’s music. They love it so much that they’ve wrested the great accomplishment of transcribing his searing solos and replicating them on the violin. But don’t they know that flat-out imitation goes against everything Coltrane’s musical approach stood for?

The disc gets off to a nice start by highlighting the complex chord structure of Blue Train’s “Moments Notice” in a lively arrangement, but it goes downhill from there. “La Danse du Bonheur,” a wanky John McLaughlin thing from 1976 in no way affiliated with Coltrane’s career, leads next into “Model Trane,” the Turtle Island String Quartet’s own homage to Coltrane, which is really just a tissue-thin rip-off of Coltrane’s own “Impressions.”

Where are the Coltrane compositions on this disc? Not in the played-to-death “My Favorite Things” or the Stanley Clarke tribute “Song to John.” Not in Thelonious Monk’s “Round Midnight,” which, sure, Coltrane once played, but so has everyone else in the world. The centerpiece is Coltrane’s “A Love Supreme” itself, but hearing the Turtle Island String Quartet’s attempt at it is like watching someone play Hamlet with a fake Danish accent: it’s excruciating specifically because of the sincerity of intent.

Nevertheless, A Love Supreme: The Legacy of John Coltrane has risen to the cream of the crap of string quartet tributes. Before her death, Alice Coltrane lauded this project, and it won a Grammy Award last month for Best Classical Crossover Album. Find out what the fuss is all about when the Turtle Island String Quartet perform Friday, Feb. 29, at the Napa Valley Opera House, 1030 Main St., Napa. 8pm. $35. 707.226.7372.