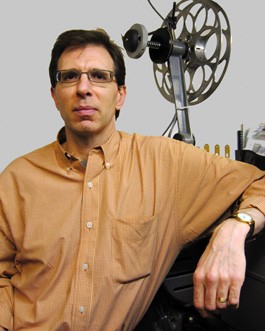 Santa Rosa hasn’t always been a mecca for folks favoring art and foreign films as well as Hollywood’s finest offerings. Many had maintained that Sonoma County couldn’t sustain a movie house catering to “special” audiences. That all changed in early 2000, the year that the Rialto Cinemas Lakeside doors opened. Proprietor Ky Boyd remembers it as “a lifelong dream [which] became a reality that has changed my life in more ways than I ever dared dream.”

As a kid growing up in Great Falls, Mont., Boyd says that he “was a borderline reading student in third grade, but movies changed my life.” Today, Boyd, 45, is almost as dedicated to books as to movies. “When I was a teenager, movies were an escapism, but in college I discovered foreign film and that’s where my passion comes from.”

He took a circuitous route to Santa Rosa, first earning a business degree at Missoula’s University of Montana, then a Master of Arts at the University of Cincinnati. He says at age 18, he “discovered there were films beyond the mainstream.”

After three years with the Indianapolis Repertory Theatre, California called. In 1993 he worked at the University of California’s San Francisco Medical Center. Despite naysayers, and with strong support from family, friends, hard work and demographic studies, the Rialto Cinemas Lakeside came to be.

The Rialto provides a bridge between culture and commerce, and offers community involvement benefiting both Sonoma County and the theater. Among its unusual offerings are the live screenings of opera. Boyd remembers, “During the Christmas season of 2006, a patron came up to me one night and said, ‘You are going to be doing the Metropolitan Opera presentations, aren’t you?’ At that moment I didn’t know what he was referring to, but I promised to look into it.” Everyone assumed Boyd loved opera, since he ultimately took a chance on such a risky idea. However, he’s not an opera fan. “But,” he says, “the arts administrator in me recognized there was an audience. I think some of my staff thought I was crazy at the time.”

Boyd almost waxes poetic when describing what he feels is a wonderful life, as he did in these recent remarks: “A great movie is like catching lightning in a bottle. The stars really have to be alive. One of the great joys has been bringing little or great movies to the Sonoma County audiences these past 10 years.”