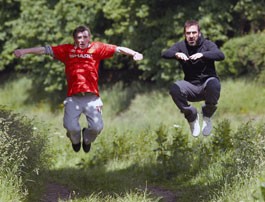 A soccer star helps 'Eric' to find himself

Director Ken Loach has been nobly serving the cause of the proletariat with social-realist films for so long that he has earned the right to make a crowd pleaser. The genial Looking for Eric is just that. Eric (the palindromic Steve Evets), a depressed, skinny Manchester postie, gets his groove back through the good counsel of imaginary pal Eric Cantona (playing himself), deemed here “the greatest footballer who ever lived.”

Like a Conrad hero, Eric is marked by a failure of nerve 30 years ago, and now his past has come home to haunt him. Eric’s grownup daughter, Sam (Lucy-Jo Hudson), needs some help taking care of her baby. She reaches out to both Eric and his long-estranged ex-wife, Lily (Stephanie Bishop), whom Eric has been avoiding for decades. Eric’s emotional crisis is detected by his bald, pudgy pal Meatballs (John Henshaw), who forms a makeshift men’s group to help Eric out.

All the fellas are supposed to get in touch with a spirit guide. Eric’s choice is obvious: “King” Cantona, the postman’s idol ever since the French footballer’s stint at Manchester United in the mid-1990s. While smoking some marijuana by himself, Eric the postman is visited by Eric the soccer star, who materializes from a poster, just as Bogart did in the Woody Allen/Herbert Ross film Play It Again, Sam. Through Cantona’s good advice, Eric starts to retrieve himself from a 30-year-long wrong turn, returning to the moment before he broke.

I don’t know jack about soccer, although Loach’s movie just about convinced me of what is so great about the game. However, I can guess what sort of charisma a Frenchman would have to have to win the admiration of so many working-class British football fans. Watching clips of Cantona play, one marvels at his preternatural ability to see when to kick and when to pass. Loach may have picked Cantona to be a guide because of an incident in the player’s lore: how he told reporters that he went to play soccer in England because his psychiatrist advised him to do it.

The Francophobia endemic in American and English films has contributed to the death of the romantic Frenchman onscreen; he’s been replaced by the bloodless ditherer and the dialect-comedy clown. Cantona, a Marseillean with Sardinian roots, is an ugly/handsome smolderer. In him, one sees the calm, debonair warmth that made moviegoers respond to French actors for decades. Cantona had a role in the 1998 feature Elizabeth. He didn’t stand out there, yet he’s a natural for the camera, and he makes a believable mentor to a man in real pain.

Looking for Eric gets a little more fantastic in the last third, when the crowd-pleasing tricks arrive. The postman has two stepchildren from an apparently disastrous second marriage. The boys are going bad from neglect and falling under the control of a sadistic local criminal. Cantona’s exhortations to “trust your team” convince Eric to take some extralegal action, and that’s when I started to feel slightly ambiguous about this film.

Loach, generally a pretty strict left-wing director (Poor Cow, Raining Stones, et al.) seems here to be turning to the methods we Americans use to deal with our own feelings of powerlessness: visualization, life coaches and fantasies of vigilante action.

This is just an undertone, and it’s not as important as Loach’s often loving look at the city of Manchester, and the talk, the humor and the pubs therein. It’s a male world with sternness behind the fellowship, clear from the William Demerest-like gargle of Henshaw, running his men’s group and urging his pals to think of “someone who totally loves you without conditions, right?” in a sergeant-major’s bark. This is a soulful movie, but its feet are on the ground.