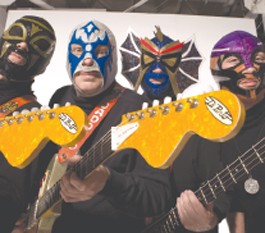 How long can a novelty band disguise their actual talent?

If basic, primitive, old-school rock with a novelty kick is a band’s calling card, they’re bound to make the same music over and over. Such repetition can be a plus; the Ramones did it, but rather than being boring, they changed history and became beloved icons of enduring critical and popular culture, and AC/DC scored a platinum hit in 2008 with Black Ice, effectively the same record they’ve made for 30 years. But for roots-rock acts, which by their nature are revisiting rather than inventing, the trap of sounding the same is a tough hurdle. Clearing that bar with fresh energy is part of the goal of Yep Roc Records, a roots-Americana label whose roster includes such luminaries as Dave Alvin, Bob Mould and Rodney Crowell.When a double bill of garage-rocking Yep Roc acts hits Santa Rosa this Wednesday with rockabilly cult-faves Southern Culture on the Skids and surf weirdos Los Straitjackets, odds are in favor of some fresh variations from the norm. Both bands released intriguing cover discs in 2007 that reinvented each act’s retro shake-‘n’-twang into a more specific subcultural sound.

For Chapel Hill, N.C.&–based SCOTS, whose 25-year career has sounded like a neon-painted funny car burning doughnuts on a dirt track, the covers disc Countrypolitan Favorites transformed their greasy-groovy white-trash schtick into focused yet eclectic country-rock. Bassist Mary Huff delivers a sincere version of Lynn Anderson’s pop hit “Rose Garden,” while the band roughs up rock gems like the Kinks’ “Muswell Hillbilly,” the Byrds’ “Have You Seen Her Face” and the Who’s “Happy Jack” (complete with banjo!). In the biggest departure from familiar rockabilly corn, SCOTS turn T. Rex’s “Life’s a Gas” into a pool of languid atmospherics.Los Straitjackets (above), an instrumental surf guitar quartet whose members left Nashville studio work to perform as cartoon characters in Mexican wrestling masks, similarly enhanced their schtick with their recent covers disc Rock en Español, Vol 1. Here, the accomplished instrumentalists move the garage to the barrio, with Spanish vocals on well-known oldies like “Hang on Sloopy,” “Bony Marony” and “Wild Thing.” Their 2009 disc The Further Adventures of Los Straightjackets is a return to more compelling surf-guitar purity, but their covers disc, like that of their swampy tour mates, shows that rock primitives can still find new ways to be novel.