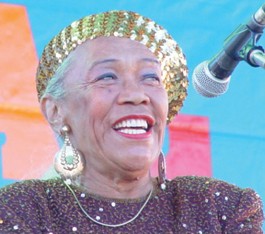 It’s Harlem in the early ’60s, and a diminutive 24-year-old singer with the tongue-twisting birth name of Umpeylia Marsema Balinton gets the offer of her life: to share a bill at the famed Apollo Theater with Ike and Tina Turner and James Brown. At the end of the show, the offer is upped tenfold when the Godfather of Soul himself approaches and asks her to join his tour. Add a staff songwriting position at Chess Records, duets with Etta James and a number of hit singles under her own name, and such was the early whirlwind for Sugar Pie DeSanto.

Having settled in the Bay Area and released a number of satisfying albums since—not to mention becoming a DJ’s deep-funk icon for her heavy-hitting 45 “Git Back”—the award-winning DeSanto appears with headliner Charlie Musselwhite and Austin De Lone at the fourth annual, free, Great American Blues & Barbecue Festival, which brings grease and char, both culinary and musical, to downtown San Rafael. Ten BBQ vendors will compete in the “King of the Que” contest, antique and handmade musical instruments will be for sale and, of course, there will be beer galore to cool down the waning days in the extended summer. It’s all happening Saturday, Sept. 12, on Fourth Street between Lootens Avenue and B Street in downtown San Rafael. 11am&–6pm. Free. 415.383.3470.