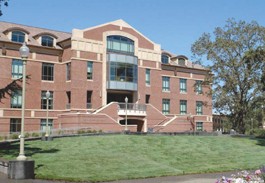 An investigation into trust-fund management, the persistence of polite politics and the annoying habits of anonymous sources

LEGACY: Among Frank P. Doyle’s many gifts to the world (the Golden Gate Bridge comes fleetingly to mind) is the new SRJC library named in his honor.

We’ve been on the cover of the Press Democrat 10 times now,” Exchange Bank chairman William Reinking says with apparent exasperation. “We’re tired of it, and the community is tired of it.”Reinking, who came out of semi-retirement last year to help the troubled bank, refers to the yearlong story of Exchange Bank and its major stockholder, the Doyle Trust, which has provided millions of dollars in scholarships to Santa Rosa Junior College for the past 60 years. Last September, when the bank announced it was unable to pay dividends to its shareholders due to bad real estate loans, the charitable trust and the scholarship were thrown into jeopardy.

To make up the shortfall, the SRJC launched the Bridging the Doyle campaign, a valiant $200,000 fundraising effort to aid students unable to receive traditional Doyle Scholarships for the 2009–2010 academic year. Exchange Bank has since returned to profitability, announcing $2.4 million for the 2009 second quarter. Assuredly, the community has likely grown tired of banking dramas, national and local alike. There might not be much more to say.

Then one quiet Tuesday morning, the phone rang.

On the line, a man identified himself as a concerned citizen and practicing trust attorney. He wanted to share some professional opinions. In order not to implicate other members of his practice, he remained anonymous, refusing to tell us his name. He called the Bohemian office number only once and provided no contact information. Instead, he asked for this reporter’s cell phone number. Attempts to return his calls connected only to a deactivated voice mailbox. He also had an irritating habit of hanging up in midsentence and calling on the weekend.

Given the somewhat cloak-and-danger nature of the whole thing, he earned the alias “Deep Doyle.”

Taking tips from anonymous sources is no small thing for any publication. However, the Doyle Scholarship has enabled nearly three generations of students to go to college, about 115,000 receiving some $76 million over the years. The program has established SRJC as one of the premier community colleges in the nation. It’s the pride of an entire community and certainly the touchstone for the bank, yet its existence remains under threat, and payments for Exchange Bank shareholders are still suspended indefinitely.

The stakes are certainly high.

We decided to listen to what Deep Doyle had to say. With each call, he made more sense and raised a few good points.

“It’s a charitable trust. The primary duty is to protect the beneficiary. One could argue in this case it’s not providing that protection,” Deep Doyle said. “It has a higher fiduciary duty to the scholarship than it does to anything else.”Frank P. Doyle, founder of Exchange Bank, established the Doyle Trust upon his death in 1948. He left 50.39 percent of his controlling interest of the bank in a perpetual trust, with the purpose of funding the scholarship program as well as Santa Rosa’s Doyle Park. The trust remains the bank’s largest shareholder and is managed by three members of the bank’s board of directors. According to Deep Doyle, those trustees have the highest responsibility to protecting the recipients of the trust’s funding.

Unlike a typical private stock portfolio, the Doyle Trust is not diversified with many different types of assets. It owns only stock in Exchange Bank and was originally established to operate that way. Deep Doyle argued that if that clause of the founding trust declaration were challenged under a law called the Uniform Prudent Investor Act (UPIA), a court could rule that the trust needs to diversify its portfolio.

Diversification could mean increased protection from future economic crises affecting the bank. If the bank were unable to pay dividends in the future, the trust could theoretically get revenue from other sources.

“It’s a trust document written 60 years ago. You have a responsibility to uphold good standards of prudent investment of today,” Deep Doyle said. “No prudent investor would recommend holding only one type of stock.”

The UPIA explicitly requires portfolio diversification for the sound financial management of a trust. Essentially, to best aid a trust’s beneficiary, you don’t put all your eggs in one basket.

To examine Deep Doyle’s claims, we consulted several local trust attorneys, who generally agreed on our informant’s reading of the UPIA, but differed on its potential application.Though she couldn’t say anything definitive without seeing the actual trust declaration, MaryClare Lawrence of Santa Rosa firm Conner, Lawrence & Rodney explained that “there are some things more important than the prudent investment standard.

“He didn’t have to give them anything,” Lawrence says of Frank P. Doyle and SRJC. “But he did, and he gets to put the terms on it. When we come right down to it, it’s still Mr. Doyle’s money.”

Representatives of the trust affirm the inflexibility and legitimacy of its founder’s original framework.

“The Doyle Trust is a specific purpose trust,” Doyle Trust attorney Kim Marois says. “The trust mandates the holding of [Exchange Bank] stock—the continual holding of that stock. There are other trusts like it.”

Despite its status as a charitable nonprofit, for Marois and the trust she represents, Doyle’s specific wish to establish a solely Exchange Bank stock portfolio is a definite and firm provision to maintain local ownership of the bank.

Reinking, on behalf of the bank, agrees. “That’s part of the filing, and the court approved it,” he says. “There are a lot of trusts that do have just one stock, some have been successful and some haven’t. It hasn’t posed a problem.”

For 59 of 60 years of its existence, the undiversified portfolio of the trust hasn’t been a problem. Of course, when the bank stopped paying dividends this year, the trust lost its sole source of funding.

When asked whether SRJC had considered challenging the provisions of the trust that binds it from diversification, college president Dr. Robert Agrella replied with an unyielding and resounding no.

“You’re going down a path I’m choosing not even to respond to,” Agrella said when asked about potential challenges to the trust’s financial management. “We’ve had no discussions about doing what you’re suggesting we do.”

Agrella also stated that the SRJC Doyle Scholarship Fund is currently unrepresented by any trust attorney. As the major beneficiary of a multimillion dollar trust, this seems somewhat unusual. The college’s general faith in the financial institution and its main shareholder is simply based on their strong past relationship.

To local attorney Lawrence, the amicable tone of the circumstances surrounding the trust reflects the general good nature of Sonoma County’s business community. “One of the neat things about this county is you can find high-level business deals still taken care of politely,” Lawrence says, “and that people in this county tend to give each other the benefit of the doubt.”The SRJC’s director of student financial services Kris Shear is certainly willing to give the bank and the trust that benefit saying, “The lack of dividends was part of a much larger economic event that was unpredictable. We do anticipate those dividends returning.”That assurance comes with some amount of faith and trust. Though Exchange Bank has returned to profitability and its leadership stays optimistic that it will eventually be able to pay dividends, the fact remains that nobody knows when. The robustness of the trust and its beneficiary still wait in financial limbo. Perhaps the Doyle free ride has ended.

Agrella is aggressively optimistic. “We’ve been rewarded in the past and will continue to be rewarded by them,” he says.

After all, bad times are hardly new.

“Frank P. Doyle was well aware of adverse economic times when he signed his will,” Marois reminds, explaining that during the Great Depression, which is “spoken of in the same breath as our current Great Recession,” Exchange Bank suspended dividends to stockholders for nearly 10 years.

“Nothing is forever,” Reinking says. “This isn’t anything that we’ve planned. Nor did anybody else. You can’t forget what we’ve done for this community.

“Some people felt that they we’re entitled to it, but, you know, it was free money.”

Daniel Hirsch
Previous articleI Want to Take You Away
Next articleSept. 12: Katmandu Festival at Depot Park in Sonoma