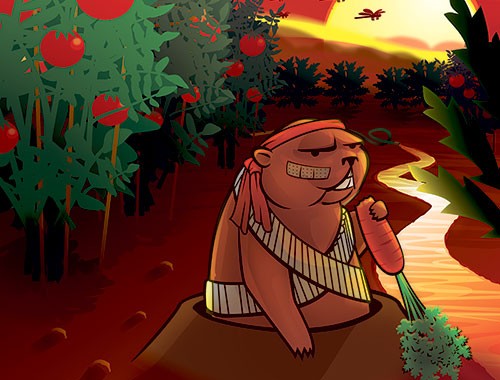 When the going gets tough, pest-plagued gardeners call in the experts

Our enemy has dug an elaborate tunnel system to evade capture. They know discovery means certain death in this ruthless battle. Excavation mounds are hidden just enough to cause damage if stumbled upon, and many have suffered the consequences—it’s time for revenge. The humid late morning air is warm and silent, save for our own movements and the whirr of tiny propellers from toy planes overhead. But we’re not here to play with toys. We’re on a seek-and-destroy mission. Our target: gophers.

The underground rodents are a menace to anyone who has ever owned a lawn, played at a park or tended a garden. And with warmer weather and gardening season upon us, the gopher hordes are on the move. “They have nothing else to do but make babies and eat your plants,” says Sonoma County master gardener Jim Lang, who gives seminars on trapping the tiny terrors. “It’ll never end. You can’t get rid of them.” But there are ways to keep them in check.

A Place to Play park in Santa Rosa is littered with gopher holes—little landmines ready to blow out someone’s ACL during a soccer game. It’s Gregg Crawford’s job to combat the garden guerrillas before the green grass in the 83-acre park succumbs to brown mounds of dirt. On this day, the 66-year-old retired sheet-metal worker and combat veteran arrived with his future son-in-law about half an hour before dawn to set dozens of traps in hopes of making a Place to Play a safer place to play.

“These are badass,” he says, demonstrating a cinch trap, the only kind he uses. When asked why, he looks me dead in the eye and says, “Because I catch a lot of gophers.”

Crawford does catch a lot of gophers. At a Place to Play, he averages 25 to 40 in an eight-hour day, once bagging 85 in one session, and he has hundreds of satisfied customers at private residences and vineyards to attest to his skills. As his weathered hands set a trap in front of me, he says it’s the trapper, not the trap, that makes the difference. “I set it for a hair trigger, just so he breathes on that son of a bitch, all he has to do is touch it and it goes off.”

True to form, he moves his thumb a millimeter in one direction and the trap snaps faster than I can blink, causing me to jump. He then shows off his own modification: a sharpened end of the closing cinch. “If he tries to go around it, this sharp end goes around and impales him.” Before I’ve even seen him catch one gopher, I get the sense that this guy really loves what he does.

Crawford started trapping underground pests 14 years ago. “I had [a mole] in my yard. And you know what? I couldn’t catch that son of a bitch,” he says. He went to one of Lang’s seminars and decided to try his hand at catching the pest. “I’d just retired, and I bought a couple of traps, caught the mole and I said, ‘This is kinda fun.’ I bought more traps and caught seven in a friend’s garden, and I was hooked, like fishing.

“Go out hunting and fishing every day, and get paid for it?” he asks rhetorically. “A grown man driving around on an ATV and getting paid should not be having this much fun.”

Gophers are formidable opponents deserving respect. Five species reside in California. The most common variety in these parts is Botta’s pocket gopher (Thomomys bottae). It is known as such for the exterior pockets on either side of its mouth, which it uses to carry food and nesting material to its den. When digging tunnels with its sharp claws and incisors, it somersaults inside a tunnel barely big enough for its body, and pushes dirt and rocks out excavation holes, making sure to plug them to keep predators and moisture out.

Gophers aren’t all bad—those mounds can provide fresh seedbed and increase the
variety of plants at a given site, and the tunnels give refuge and shelter to other animals. Their droppings in the tunnels fertilize the soil. And some animals find them delicious.

“These are at the bottom of the food chain,” says Crawford. “Everyone wants a gopher.” But if a snake, raccoon or other creature looking for a meal does get in, the gopher has an effective defense strategy. They’re normally skittish creatures and quite quick on the retreat, and that’s usually good enough. But if confronted, a gopher will clamp down with an astonishing 18,000 pounds of pressure per square inch using yellowed front teeth that can grow to almost an inch long. By comparison, the average dog bites with about 320 psi. Crawford says he has been bitten once, and quickly changes the subject when asked for more details.

A single gopher can make several mounds in one day, and create a 50-foot-long tunnel with lateral mounds in about a week. They work on four-hour shifts, digging for four and sleeping for four. “It’s a tremendous amount of dirt they move in a year,” says Crawford. Unlike moles, which dig one continuous linear path just below the surface, a gopher’s tunnel is only visible from the surface by tracing its mounds.

Though Crawford has an iPhone, and even texts pictures of his successful missions to clients upon request, he’s decidedly old-school in his techniques. His metal traps are purely mechanical. When first studying his enemy, he took a first-hand approach.

“I got two windowpanes, spaced them about four feet apart,” says Crawford, “put in some nice Forestville soil, caught a live [gopher], threw him in there and I’d watch him dig. Every day, he’d dig a different tunnel. I’d come home, and there’d be more tunnels. It was just like a giant ant farm, you know, like when you were a kid? That son of a bitch, he dug and dug and dug. I fed him carrots and celery, stuff like that. He ate everything.

“I had a screen and a brick over the top. One day, I fed him and didn’t put the brick back. I come home from work, and he had dug a new tunnel, but he made like a ramp going up to the top, got out of my cage, jumped off the table and got into my backyard.

Crawford says the best place to set a trap is in a fresh hole on the main tunnel path. He points out one 20 feet away from us that would be perfect. “See, this dirt clod right here is starting to bleach out from the sun. He probably dug this about 30 minutes ago.”

A trap goes in, with a hair trigger.

To our right, a trap has sprung, but no gopher—the hole has been backfilled. “How the hell did he get by my trigger, and pumped the hole full of dirt?” Crawford asks. He nonchalantly blames Skylar Delzell, his 30-year-old future son-in-law, whom he’s training to take over the family business. Delzell quickly informs me that his first day on the job was four days prior, a fact I wouldn’t have known based on Crawford’s tough-love teaching style.

To our left, a gopher pops its head out of another hole. “Skylar, this guy’s teasing me right here, he’s poking his head out,” Crawford yells across the field. Then he gets intensely quiet. “Don’t move,” he tells me. “You see him?” I nod. We wait. The little turf terrorist is watching us, determining our threat level. Crawford moves toward the hole and the critter disappears.

A trap goes in, with a hair trigger.

Ten minutes later we hear the tell-tale snap, and head over to find a one-legged wounded veteran of the gopher wars caught in a trap, flopping around like a fish on the deck of a boat. Crawford ends the gopher’s suffering with a quick rap to the head. “This job is not for the squeamish,” Crawford says.

Despite his ongoing efforts, Crawford says he hasn’t seen a drop in his average catch. “Most of my business is repeat business,” he says. “A gopher, when he gets into your perennials, he’ll eat every last one of them. And they gnaw on woody plants: grapes, apples, figs, pears. I don’t know what they see in it, but they’ll gnaw on the woody parts. They love roses.”

Crawford believes west Sonoma County is particularly favored by the underground pests. “About 60 to 70 percent of my business is in Sebastopol and West County,” he says.

Lang, the master gardener, says gophers aren’t particular to any part of the North Bay. “I live in Petaluma, and they’re like ants here,” he says. They also love vineyards. “I’ve got a friend with 25 acres of grapes. He traps about 300 a year, every year.”

Crawford and Lang agree that trapping and education are the best ways to stall the gopher invasion. Sharing information with neighbors and keeping an eye out for fresh holes helps keep them at bay. Lang says he’s heard of folks trying to poison them with everything from Aqua Velva aftershave to chewing gum, with some even stooping to lower depths. “I heard some people put Ex-Lax down the hole, thinking they’ll poop themselves to death,” he says with a laugh.

For the record, none of those “poisons” actually kill gophers.

Sheila Bradford catches gophers, too. In the relatively small world of underground-pest eradication, she and Crawford have crossed paths; in fact, Crawford helped get her started with her own business. Both agree that education is key. “We need more people to do it themselves and stop the spread,” she says. “It’s getting worse and worse.”

Bradford began catching gophers as an employee with the San Francisco Recreation and Parks Department, where she was so good at her job that a local TV news crew did a story on her. She keeps track of her success, not with marks on a helmet—with more than 2,000 catches so far, she would need a huge headpiece—but by mental tally. “It started out as me being competitive with one of my coworkers,” she says. “They’d never heard of people not only keeping track, but having those kind of numbers.”

Now that she’s out on her own, competition drives her. She references Caddyshack with a chuckle. “It’s like the gopher beat him,” she says of Bill Murray’s golf-course groundskeeper character. “It’s a way to get comic relief from a job that can be pretty gross sometimes—to think of it like a game, like the gopher is an opponent.”

Bradford has a different approach than Crawford—she sets traps inside the tunnels rather than at the excavation holes. Her clients have referred to her as “the Gopher Whisperer,” but she shrugs it off. “It’s like the Caldecott tunnel,” she says of a gopher’s main thoroughfare. “They’re going to be going through it.”

Both decry the use of poisons, for a poisoned gopher can be deadly to a pet or bird of prey, if left unattended. Traps are the way to go.

Like Crawford, Braford is good at her job. And like the combat veteran, she doesn’t mind the gruesome aspect of it. “I don’t have a moral issue with killing them,” she says. “I got over that years ago.”