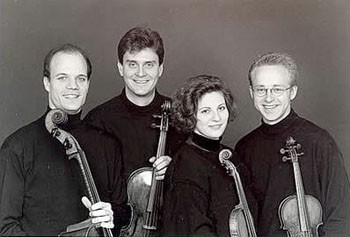 The USA Patriot Act, approved by Congress in the aftermath of the 9-11 attacks, is supposed to snare terrorists before they have a chance to enter the country. So it was something of a shock within the normally staid classical music world when Berlin-based Artemis Quartet cellist Eckart Runge, 35, was denied a visa under stricter new procedures requiring lengthy background checks of any foreign national with a criminal record.

You bet. According to the New York Times, Runge had been charged with misdemeanor shoplifting of a 99-cent pair of tweezers in 1991. The embarrassing incident–which the cellist has called “an inexcusable mistake”–occurred in Colorado where Runge studied cello. At the time of the theft, he went to court and was ordered by a judge to pay the court costs. He never served any jail time.

However, the subsequent cost was much greater: due to Runge’s visa problems, the acclaimed quartet–which recently won the prestigious Diapason d’Or de l’Annee from the French music magazine The Diapason–was forced to cancel all of its 13 U.S. tour dates this fall, including its Oct. 29 concert for the Chamber Music in Napa Valley series at the newly renovated Napa Valley Opera House Cafe Theatre.

However, the quartet did salvage an Oct. 20 concert in Montreal, where tweezer-stealing cello students are not considered a national security risk.

“We are very sad,” Runge told the Times during a phone interview from Paris. “Of course, one makes mistakes in one’s younger years, and these mistakes are there to be learned from. But now I have paid the price a second time–not only me, but all the other people involved, which is completely disproportionate.”

The quartet hopes to reschedule its concerts later next year.

Meanwhile, Chamber Music in Napa Valley continues to mark its 23rd season with an impressive lineup of world-class talent. On Sunday, Nov. 17, Finnish soprano Karita Mattila (hailed by the press as “the Finnish Venus”) performs with San Francisco Opera music director Donald Runnicles, who will put down his baton to accompany Mattila on piano.

The rest of the 2002-2003 season is equally impressive. On Dec. 2, the fiery pianist Yefim Bronfman, the Russian-born Israeli and protégé of Isaac Stern, will perform a program that features works by Rachmaninoff and Prokofiev; a new work by Esa-Pekka Salonen; and Beethoven’s Piano Sonata no. 7 in D.

Other dates include Romanian pianist Radu Lupu’s program of Beethoven, Debussy, and Schubert (Feb. 3); the Academy of St. Martin in the Fields Chamber Ensemble performing the Mendelssohn Octet for strings, among other works (May 5); and the pianist Emanuel Ax, who will close out the season with a surprise program (May 6).

After two acclaimed albums of classical string quartets–by Schumann and Tchaikovsky, respectively–the St. Lawrence String Quartet has issued an extraordinary disc of modern recordings by Osvaldo Golijov, the Argentinean composer best known for his work with the Kronos Quartet. When Golijov says in the liner notes that his first meeting in 1991 with the redoubtable St. Lawrence String Quartet was a life-defining moment, believe it–you’ll be hard-pressed to find a more dynamic collaboration between a living composer and a contemporary ensemble.

Yiddishbbuk (EMI Classics) is in all likelihood the most powerful piece of new music you will hear this year. Think Hebrew mysticism mixed with the visceral force of a piercing Astor Piazzolla street-fight motif and the soul-shattering existential angst of novelist Franz Kafka, and you’ll get an inkling of the intense emotions that this recording can stir.