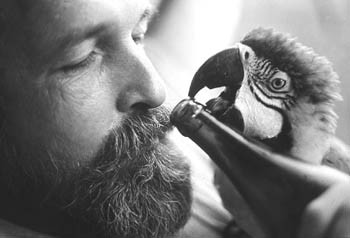 Click here to buy ‘Burden of Dreams’ at Amazon.com

Blank but not forgotten: Filmmaker Les Blank focuses on the music, culture, and cuisine of Americans outside the mainstream.

On his website, El Cerrito-based filmmaker Les Blank describes a still-existent film palace in Tampa, Fla., that he loves: “It has twinkling stars in the ceiling and clouds that float by. Plus lots of bare-breasted women with long flowing tresses seemingly everywhere I looked. One held the water fountain out for me to drink from. Others . . . were strategically situated throughout the wondrous and mysterious darkened stucco caverns. For a breastfed kid of four, it was most stimulating.” Maybe here is where food and cinema became so happily entwined in Les Blank’s work.

Eight of Blank’s nearly three dozen short documentaries have been reissued in new prints commissioned by the Academy of Motion Picture Arts and Sciences. With the exception of his landmark work Burden of Dreams, the films appearing at the Rafael Film Center series follow Blank’s many investigations of southern kitchens and southern music. His subjects are folk and blues musicians, people like Mance Lipscomb (A Well Spent Life), Professor Longhair (Always for Pleasure), and Lightnin’ Hopkins (The Blues Accordin’ to Lightnin’ Hopkins).

Blank’s most unusual cooking-themed movie stars his friend Werner Herzog, star of Werner Herzog Eats His Shoe (1980; showing Saturday, Nov. 23). Herzog could be summing up Blank’s themes when he philosophizes, “Cooking is the only alternative to filmmaking.”

Herzog tucks into chaussure à la Chaplin as a result of losing a bet with documentary maker Errol Morris. The German director’s stout-heartedness (or stubbornness) leads him to further debacles–more serious than shoe indigestion–recorded in Blank’s full-length film Burden of Dreams.

Like Hearts of Darkness, about the catastrophes on the set of Apocalypse Now, Burden of Dreams (1982; showing Sunday, Nov. 24, 7pm) observes the behind-the-scenes troubles of Herzog’s Fitzcarraldo (1982). Shot in Peru, Fitzcarraldo is based on an incident about a rubber planter of the early 1900s in Amazonia. Supposedly, the European adventurer hired hundreds of Indians to haul a steamboat over a jungle ridge. Herzog’s dream was that Fitzcarraldo’s boat ought to be many times larger and fully intact.

Herzog decided to film in virgin territory unsullied by European contact. Once there, he unwittingly brought to these “pure” natives all the baggage of colonialism: forced drudgery, prostitution, displacement from their land. As Pauline Kael put it, Herzog had got himself into a zone between documentary and drama where neither worked.

Though his films are almost non-narrative, Blank’s is an orderly mind: you can see it as early as his 1968 film, lyrically titled God Respects Us When We Work, but Loves Us When We Dance. Being without dialogue, the film makes no special pleading for the flower children it watches at Los Angeles’ first love-in. Yet Blank seems to see everything worth seeing. The same kindly eye falls on everyone, from unimaginably innocent hippies to Louisiana farm workers to South American Indians: disparate people Blank unites in a universal love of food and music.