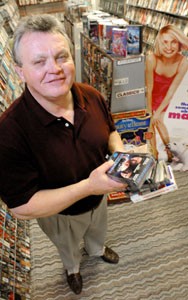 Brush off your essay skills–a Kenwood store could be yours

With a flourish of the pen and some sound business sense, the only video store in Kenwood could be yours. The current owners of Wine Country Video want you to vie for their store, and all it takes is your best 500-word essay and a $150 entrance fee. Thanks to inspiration from a 1996 movie set in a remote town in Maine, husband and wife Ron Freberg and Sylvia West are giving the business away to the best applicant.

When Freberg and West started thinking about retiring, they considered the best way to find new owners for their store, which is located in central Kenwood. Though they could have sold it to the owner of a video store in Glen Ellen, they opted instead to go with the essay contest.

“We saw the movie The Spitfire Grill, which is about an essay contest for a restaurant, and we thought it was a wonderful idea,” says Freberg. “The great thing about the essay contest in the movie is that it was a chance for someone to take over the business that ordinarily couldn’t afford to. We’d like to give that to someone too.”

In the movie, an older woman played by Ellen Burstyn has had her restaurant for sale for more than 10 years, but no one in the remote town of Gilead, Maine, has bought the place. Thus, the essay contest is born. After advertising in places like New York and Chicago, the contest brings in more than 2,500 entrants.

In the movie, the entire town gets involved in the contest and the camera pans to show even the surliest Maine native reading the essays. In the end, the person who most needed a new chance in life got the restaurant.

In real life, however, running an essay contest is a little more complicated than putting ads in various newspapers and enlisting the neighbors to help you choose the best one. Freberg and West have hired a lawyer and marketing firm to promote the contest, opened a bank account for the entrance fees until the contest is over, and chosen three judges to pick the winner.

“The way the contest is set up, no one can ever say, ‘Ron knew so-and-so and let him win the video store,'” says Freberg. “I see none of the essays. The lawyer picks them up from the post office, cuts all the names off, and assigns a number so that even the judges won’t know who they are reading.”

The criteria for judging the contest are a little more complex than picking the most heart-rending essay. Participants are judged on their business skills, how community- and customer-minded they are, and their concept of what it takes to own and operate a store. And, yes, spelling and grammar do count.

“What we’re looking for is the most well-rounded essay,” says Watkins. “Not just why they want the store, but reasons why they’d be good at it. We needed criteria that were more objective than who most needed a change.”

The store itself is located in Kenwood’s only shopping center between the post office and the grocery store. It is the only video store in the area, which means virtually no competition. By itself, the business is worth more than $100,000.

The store is a popular place, Freberg says, with everyone in Kenwood stopping in at one time or another, especially in bad weather.

Ron and Sylvia have owned the store for two years. Previously, they worked in real estate in Florida, operated a resort on the island of Antigua, and operated a bed and breakfast in Palo Alto. They plan to retire in Mexico, where the cost of living is more reasonable and it is beautiful–and they can still rent movies.

The deadline for the contest is Feb. 15, 2003. For more information, visit www.winecountryvideos.com.