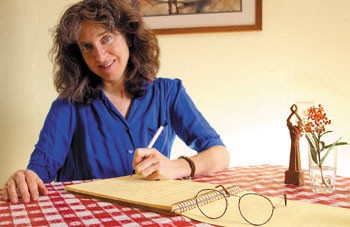 Power of the Pen: Hannah Schoenbech, a co-facilitator for the AFDC writing group, gives voice to her experiences.

Welfare moms learn to tell it like it is

“What do you do when you turn on the light in the middle of the night and see a sink full of cockroaches–and know you won’t have a place to live at all if you complain to the landlord or anyone else?”

An important question to ask, says Margie Alexander, who had the cockroach experience when she was raising her children in dire poverty. (To protect her privacy, we have changed her name.) A former welfare mom, Alexander is a “graduate” of Aid to Families with Dependent Children (now called Temporary Aid to Needy Families). Against overwhelming odds, she got herself and her children through that terrible time and is now fully self-supporting as a registered nurse.

But Margie Alexander is not about to forget where she came from. She’s on a crusade to help women who suffer as she once did. To that end, she’s inviting former AFDC moms, and current TANF moms, to meet each month for a year to write a book of their experiences, wisdom, and suggestions. Her intention is to publicize the harsh realities of being a mother on welfare. Along the way, she expects a clear picture of what it takes to achieve self-sufficiency to emerge. Alexander believes that this book will inspire the women who read it by letting them know that it is possible to climb out of poverty.

That’s not to say it’s easy. “[TANF] is the last level of survival for the poor,” says Alexander. “There are problems unique to people in these situations that really need to be addressed. . . . Women who live in the worst neighborhoods are surrounded by people who are predators, and they have no way to get out of it. It’s an ongoing struggle for women at the bottom level of poverty. The things that we do all the time that are part of our normal life are luxuries in impoverished neighborhoods.”

One of TANF’s many tools used in assisting the impoverished is the requirement that the able-bodied among them participate in Sonoma Works, a county program that offers classes in résumé writing, interviewing, and other job-hunting skills. Jerry Dunn, division director of employment and training for the Sonoma County Human Services Department, says that approximately 2,400 families in Sonoma County are currently enrolled in TANF. In fiscal year 2000-2001, Sonoma Works placed 988 people in jobs that paid an average of $8.78 an hour, and 31 percent of those who have left the program now exceed the county standard for self-sufficiency.

Impressive as this is, it still means that 69 percent are not self-sufficient. What’s more, says Johnetta Dedrick, program coordinator at Sonoma County People for Economic Opportunity, many welfare mothers who come to SCPEO do find work, and some earn as much as $14 an hour. However, that’s not enough to support a family. “The only way they’re going to make it is if they’re in subsidized housing,” she says.

In addition to the job-hunting requirement, TANF also sets a 60-month lifetime limit on aid for the parents in a family. “The net impact is that the grant is reduced [after 60 months],” says Dunn. “California is one of the few states where the children continue to be aided. In many states, the whole family is ineligible.”

How do women on TANF manage to support their children? “Barely,” says Dedrick. “In our program, they can support them because we provide transitional housing and we hook them up with all kinds of other services in the community that subsidize their food, family connection programs, and other agencies. We provide housing and refer out for other needs.”

But even SCPEO can’t always help, says Dedrick. “We’re considering bringing a woman in whose income is $495 from TANF, but in our housing complex, the cost of a one-bedroom apartment is $475. To move her in and move her out in a month because she can’t afford it is a setup for failure.”

Margie Alexander and yoga teacher Hannah Schoenbech, Alexander’s co-facilitator for the writing group, don’t pretend that writing will solve all the problems that confront welfare moms. But they do expect it to help.

“There have been times in my life when I have not felt empowered,” says Schoenbech. “I want to give as many women as possible the opportunity to feel empowered. I found for myself that it helps me find my strength when I can either write or voice my experiences and what I have learned from them.

“I also think our book will be tremendously helpful to other women when it’s published, because it will help them find their own strength.”

Mothers can also help each other in very direct ways, says Alexander. “There have been times when I couldn’t fight for myself. But I’ve always been able to speak up for other people. In an apartment complex that I once lived in, one of my Hispanic neighbors was pregnant with her third child. When I learned that she had been washing dishes in the bathtub for two months because the manager refused to fix her kitchen sink, I confronted the manager. He still refused to do anything about it, so I called La Luz [Hispanic family service center in Sonoma]. La Luz made one phone call to the manager. Two days later, the sink was fixed.