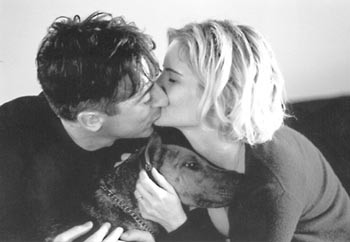 Hollywood romances hit the rocks in ‘The Anniversary Party’

LIVE CLOSE. Visit often. According to screen legend Katherine Hepburn, that strategy is the very simple secret to maintaining a beautiful relationship. She should know. Her 25-year-long love affair with Spencer Tracy is said to be among the most tender and devoted in Hollywood history, despite the fact that these two actors never wed. (Tracy’s rigorously Catholic wife refused to grant him a divorce.)

The results suggest that interpersonal human dynamics are universal, relationship issues eternal, and happiness as elusive for the rich and famous as it is for the rest of us. These folks may be wearing Galliano and sipping Dom in a Richard Neutra­designed house, but their lives are as marred by addictions, infidelity, and failed dreams as anyone on Jerry Springer.

After a six-month separation, the famous couple have not only reconciled; they have decided to start a family. The soiree, sporting a guest list awash in Hollywood A-listers as well as the couple’s arty friends, is intended to cement their renewed (and hopefully improved) union.

Among the revelers: the couple’s wound-tight married business managers (John Benjamin Hickey and Parker Posey); an Oscar-winning star, his beatific wife, and their two perfectly adjusted children (played by real-life smug-marrieds Kevin Kline and Phoebe Cates, plus their genuine offspring); and the ditzy ingenue cast as Sally in Joe’s movie (Gwyneth Paltrow).

What starts as a jolly celebration soon disintegrates into a wildly baroque soap opera, fueled by Ecstasy and complete with a celebrity skinny-dipping and near-death experiences. And with this cast of real-life friends and lovers, how could it not?

And there’s much to pick over. For instance, Sally’s jealousy of her young rival throws a nice All about Eve twist to the mix, while highlighting Leigh’s own dismal dealings with a town that has never quite appreciated her brilliance.

Austin Powers: The Spy Who Shagged Me