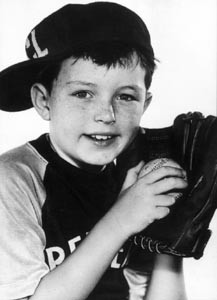 David Templeton takes interesting people to interesting movies. This week, he takes a call from Jerry Mathers, star of TV’s legendary Leave It to Beaver series, who grew up in the public eye on the then-fledgling television medium, to discuss the eerie trapped-in-a-sitcom fantasy The Truman Show.

OH, GO AHEAD–guess,” urges Jerry Mathers, playfully goading me on over the phone. “Try and guess what my favorite recent movie is.” “Um, how recent?” I need to know. “Last year or so,” he estimates. “Just came out on video, I think. Lemme give you a clue: It’s a Bruce Willis movie.”

“Yep! That’s the one,” Mathers crows happily. “I loved that movie! I’d put it right up there with The Wizard of Oz. I can’t believe it didn’t do better than it did.

“It’s a perfect example,” he further explains, “of the kind of movie I like, as opposed to, you know, this thing I saw yesterday–The Truman Show.”

Jerry Mathers–better known as “The Beav” from the legendary TV show Leave It to Beaver–is killing time this afternoon, waiting for the arrival of a crew from Extra. They will be doing a segment on Mathers’ just published autobiography … And Jerry Mathers as “The Beaver, a remarkably laid-back account of his life as one of the world’s best-known child stars–and his self-described “love/hate relationship” with the character he played for so many years. We also hear about his post-Beaver exploits: the rumors that he had been killed in Vietnam, his battle with obesity, and his marital breakup a few years ago.

Yesterday, Mathers went to see the The Truman Show, starring Jim Carrey as an insurance salesman who discovers he’s trapped inside a massive Hollywood sound stage and that his entire life is a live, 24-hour TV show, watched by millions from the day he was born. Critics–the same ones that scoffed at the interplanetary antics of The Fifth Element–have been fairly unanimous in calling Truman one of the best films of the decade.

“I didn’t buy it,” laughs Mathers. “It was a hard stretch for me to believe that people would be that interested in just one person. I sat there, thinking, ‘I’ve done situation comedies. I’ve pitched new ideas for sitcoms.’ If you’ve ever worked in TV and had to pitch an idea to some studio head who’s looking at a million bucks just to shoot a pilot, you’d know that they wouldn’t be interested in a show about a guy getting up and brushing his teeth in the morning and then going to work selling insurance.”

“I wonder what kind of a round-the-clock TV show your life would make.” I say.

“It wouldn’t be very interesting either,” he laughs. “Really. I’m not the most exciting person. I get up at 4:30 in the morning, in time for sunrise, and I run for an hour and a half. After my run, I come back home and usually play guitar a while; then I write letters and do business things, and then I just do stuff. I like to work with my hands. I work on cars. My day is not filled with meeting models and hanging out with movie stars.

“On my best days, when I’m working on a film project or something, it might be a little bit more interesting–probably more interesting than watching an insurance guy out making cold calls–but not by much.”

A TV SHOW OF MY LIFE would probably appeal to the people who buy those videos of fish swimming around in an aquarium,” he remarks.

“Wasn’t it a little eerie,” I ask, “seeing poor Truman attempt to break away from his fake world–to try to experience life apart from the show he was trapped in?”

“You know what? Not really,” Mathers returns. “I never saw myself as trapped into anything. I honestly could have divorced myself from Beaver long ago if I’d wanted to, but I took the tack that, you know, it’s a great show. I’m proud to be associated with it. But I’m my own person. I don’t feel trapped into living my life the way Beaver would live it.

“Sometimes I’ll be out on a date, though,” he reveals. “And all of a sudden they’re trying to relate to me as the Beaver. They’ll say, ‘Oh remember the time you and Wally did such and such?’ and I’ll have to say, ‘Um, I never did that. That was in a script I performed, but I never really did that.’

“That’s always kind of weird,” he laughs. “The best thing about the movie, I guess, is the message of Truman having the courage and everything to try to escape from the mundane role he was forced into,” Mathers observes.

“A lot of people just vegetate through their lives, making plans and having ideas, but always putting it off till tomorrow. In my case, having retired from acting and not doing anything at all but getting fat, it took a doctor telling me, ‘Hey, shape up or there won’t be any more tomorrows.’

“As good as my life has been,” concludes the one-time Beav, “I realized, like Truman, that I had a lot of things I still wanted to do. I think the next episodes of my life will be even better.”