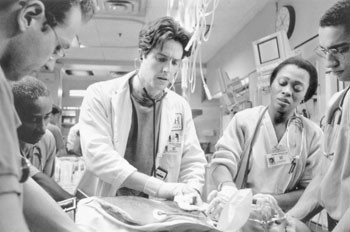 Body of Evidence: A chastened (if not chaste) Hugh Grant performs.

Writer David Templeton takes interesting people to interesting movies in his ongoing quest for the ultimate post-film conversation. This time out, he calls up forensic investigator and author Sarah Lovett to discuss the classy medical thriller Extreme Measures.

THE MODERN THRILLER, as a cinematic genre, tends to be powered by a gleeful employment of certain grisly images–heads in boxes, faceless corpses tumbling into elevators, severed appendages, scars, stitches, pools of blood–as much as by the pacing and plot that identify it as a thriller. As I recall such movies as Seven and Silence of the Lambs, it is Gwyneth Paltrow’s predictable demise and Hannibal’s impromptu facial surgery on a guard that first leap to mind.

That and the feeling of having been relentlessly, though stylishly, assaulted.

“I love thrillers,” laughs author Sarah Lovett, a former forensics specialist turned crime novelist, with whom I have been discussing Extreme Measures, the latest example of mainstream mayhem. “I love scares and that kind of thing. But I often come out with a kind of burned-out feeling. You know that feeling? When you’ve just seen meaningless violence for two-plus hours, and you come out feeling tawdry, and dirty, and kind of hung-over?”

I know the feeling.

Measures stars Hugh Grant as a New York emergency-room doctor who discovers an unsettling conspiracy to kidnap homeless men and use them for surgical experiments. It uses a minimum of in-your-face shock shots, relying instead on the aforementioned use of pacing and plot and a parade of stimulating philosophical questions, coming off as pleasantly light, while still managing to serve up its quota of lovingly photographed dead or dying bodies.

Lovett’s own novels, the brand-new Acquired Motives (Villard, 1996) and the subtle, unsettling Dangerous Attachments (Villard, 1995), rate similarly low in ‘the yuck factor,’ while still scoring big with gripping stories and intelligent characters, a fair number of tasty ethical dilemmas, and, of course, the random severed body part. Featuring the resourceful Dr. Sylvia Strange, a forensic psychologist who tracks down folks who have a murderously shaky grip on reality, Lovett’s novels draw on her own experiences as a forensic researcher at a New Mexico penitentiary.

In response to my suggestion that the cinema’s increasingly close-up-and-personal approach to on-screen death might reflect a cultural obsession with watching people die, Lovett hesitates.

“If you’re right about that,” she offers, “I think it’s tempting to tie it into the fact that we’ve become so removed from the death process, just in the last 50 or 100 years. A generation ago–my mother’s generation–it was different.

“My mother is in her mid-’80s. In her youth, families were tending to their own dead. Now we don’t tend to our dead. We pass them on to professionals. It used to be that women would wash the bodies of their dead and put pennies on their eyes. We’ve let that go. So it makes sense that we might have an obsession that we are acting out voyeuristically.

“But you know, [humans] have always been fascinated with death. I remember being a kid and driving by accidents. I remember being really acutely aware when we’d pass a fatal collision, the gore and everything. That has never changed in human nature. We are curious about disasters. I think probably other primates are, too.

“Still, it is strange that we push our dead away as fast as we can, cremate them, and then come home and watch all these images of death for entertainment.

“There was a woman here about a year ago,” Lovett continues. “I remember reading about her. She had cancer or AIDS, I forgot which, but she was dying. And she was trying to have a relationship with her own death. So she picked out her own coffin. She worked out the funeral ceremony. She planned ahead for her death. I remember thinking, ‘How healthy of her.’ This was not morbid obsession, though it may have looked like it to others. To me it was, well,” she laughs, “to me it was rather thrilling!”