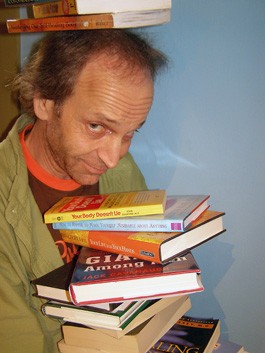 Everyone knows that comics are neurotic. Hell, it’s part of the schtick. But few standup comics actually have themselves analyzed onstage as part of the act. That’s pretty much solely Ed Crasnick’s schtick.

Crasnick, a longtime standup and writer who’s appeared on everything from The Sopranos to Curb Your Enthusiasm, who’s written jokes for all the big names and who is currently involved in stoking straight man Donny Osmond’s comedic career (know this: Donny is great!) brings his “Legends of Self-Help Comedy Tour” to self-help central when he lands in Mill Valley on March 13. With Moon Zappa. And comedian Geoff Bolt. And professional map maker Tom Harrison. And an “evolutionary” astrologer. And the Dick Bright Orchestra. Add various video segments and an overall humanistic psychology theme and one is quickly around to: Huh?

Speaking by phone from his Los Angeles home, Crasnick explains that his revue is what might happen should Oprah and Conan O’Brien coproduce an evening. “You’ll see people talking in a way that they don’t normally speak,” he says. “The idea is that you will be funny if you’re funny. You will be entertaining. You don’t have to put that on. It’s a lot better if you can show the whole person who happens to be a musician or an actor.”

Crasnick mixes all of this up with short videos and live music, actual psychologists like Dr. Michael Solomon and such off-list celebs as Zappa. What is she doing there? “Moon is a person who has done a lot of self-help and self-exploration, her writing and her books are all about that,” Crasnich explains. “It’s not easy to be the daughter of an icon and have people come up and say your father was a genius, and you? Not so much.”

While Crasnick predicts that the night will be an “emotional Lollapalooza,” he also assures that he wouldn’t do it if it weren’t actually funny. “It’s the most fun I’ve ever had,” he says.