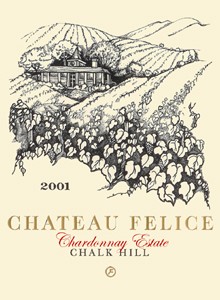 Lowdown: We were a little unsure about the paté pops.

Chef Laurie Souza hates it when people call them that, but she admits that the little panko bread-crumb-covered paté slabs on lollipop sticks do have a certain, well, candylike quality. Try them anyway, she encouraged. No regrets, as they paired beautifully with Chateau Felice’s 2001 Estate Chardonnay on Chez Felice’s food and wine pairing, Tour of the Terroir. The tour ($15) matches four wines (or carefully selected flavors of Sonoma Sodas for the teetotaler) with small hors d’oeuvres.

Opened in February, Chez Felice is a tasting room and restaurant featuring the food of Souza, a former Applewood Estate Inn chef, and wines of the up-and-coming Chateau Felice.

Vibe: A little-known gem, Chateau Felice is neighbor to Chalk Hill Winery. After purchasing the land–which they’ve converted from pastures over the last several years–the family has been turning out unique and tasty wines well under the radar. There’s not doubt that the French bistro-like atmosphere of the restaurant and well-paired foods with excellent wines will bring more attention. Nestled in the heart of the new Windsor square, the bistro is tiny and quaint, with just a handful of tables. Lunch and dinner are served Wednesday through Sunday, with flights served at the bar until 10pm.

Mouth value: Daughter Genevieve Llerena is the family’s winemaker, holding a degree in mechanical engineering along with her seven years of work in wineries. In talking to her, you realize that her wines reflect her scientific mind–working to pair unique flavors and fermentation styles into solid finished wines. The 2002 Acier Estate Chardonnay ($16) is aged in steel tanks with a bright, fruity apple and pear taste. Their 2001 Chalk Hill Estate Chardonnay ($20) is an oakier California-style Chard with luscious caramel flavors. The standout is the 2000 Cabernet Sauvignon ($27), with a deep fruit-forward cherry taste and a limited amount of tannins on the palate. A unique wine to try is the Vermillion ($9), a blush-colored wine that is drawn off the reserve Zinfandel grapes after the skins have soaked 28 hours. Cool and bright, it is the essence of Zinfandel for a hot summer day.

Don’t miss: Grab a gelato at Powell’s Candy Store (720 McClelland Drive, Windsor) and sing along to “The Candy Man.”

Five-second snob: Are you a super-taster? Certain individuals have an abundance of taste buds on their tongues, giving them the ability to taste sweet, salty or bitter flavors with much more intensity than the average person. In general, women tend to be endowed with this ability in greater numbers than men. Want to find out if you’re a super-taster? Put a round reinforcement tab on the front of your tongue. Place a drop of blue dye in the empty center of the ring. Then, with a magnifying glass, count the number of buds in the hole (they’ll remain pink). If you have more than 14, well–you’re a super-taster. Congratulations!