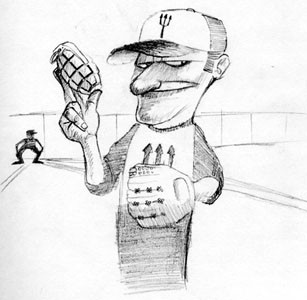 Report to the commissioner

WE THE MEMBERS of the Investigating Committee would like to begin by expressing our appreciation to the Commissioner and his staff–especially Mr. Finch, who found the wiretap in the coffee urn, and Miss Needham, who sat at her stenography machine throughout the long ordeal of our investigations, never losing her composure despite the bad language and her neuralgia. Also, we would like to thank club owner Mr. Brinkerhoffer for answering our questions so forthrightly and for removing Mrs. Brinkerhoffer from the room when she became hysterical. Finally, we would like to express our gratitude to those coaches and players on the team who had the maturity to understand that we were not conducting a witch-hunt, but were acting to preserve the dignity and traditions of a great sport and grand pastime. To those four men go our special thanks.

Based on our investigations, we believe we can now reconstruct the series of unfortunate incidents that took place on the field during the fifth inning on July 22. It is not our intention to minimize the severity of these offenses–they were reprehensible and have no place in professional sports. But we feel it is only proper to note for the record the special circumstances that the team found itself in at the commencement of play that day.

As you know it is the nature of competitive sports that in every contest one side must win and one side must lose. Sometimes a team will win more games than it loses, sometimes it will lose more games than it wins, and once in a while it will lose 31 straight games, setting a new major league record in futility. This does not necessarily make the players on that team “losers” even if a photo of the team appears on the cover of a national sports periodical under the headline “Losing Incorporated.” A prolonged losing streak can be distressing, especially when 35,000 hometown fans show up at the stadium wearing clothespins on their noses. Nor is it pleasant when an opposing team sends in a 37-year-old pitcher to pinch-hit and the gimpy veteran powers a rising line drive over the 355 sign, scoring three runs; or when seven minor league players refuse to report to the team, stating they prefer to remain in Double-A ball “where the opportunities for career advancement are better.”

Extensive research by sports psychologists has shown that aside from victories, a positive mental outlook is all that really separates the “winners” from the “losers.” Unfortunately, the team allowed its anemic hitting, execrable pitching, inept fielding, and girlish base-running to defuse its will to win. Rather than finding fresh inspiration in each setback, team members gave way to petulance, self-loathing, and mass hysteria.

We know from the videotapes that the July 22 fracas began when right-fielder Murphy dropped a routine pop fly, allowing two runs to score. Although this error was not critical to the outcome of the game–the team being 13 runs in the hole at this time–it appeared to upset Bixby, the pitcher, who directed a comment at the bungling right-fielder. Bixby testified that he merely shouted “words of encouragement,” but Murphy contends the comments were “profoundly insulting” to his “manhood, way of life, and grandmother.” Incensed by these “unfair criticisms,” Murphy threw the ball at the pitcher, striking him in the groin and causing him “intense discomfort and embarrassment on national TV.”

While “coming to the aid” of the fallen pitcher, Murphy was accosted by center-fielder Pozinski and “rudely slapped.” Pozinski admits “chastising” Murphy, but asserts he did so under “extreme provocation.” It seems Pozinski has a skin condition from the fertilizer used on the center-field grass and must wipe his hands and “other areas” with a clean towel after every inning. This towel, Pozinski alleges, Murphy used surreptitiously in cleaning mud off his spikes despite continued “expostulations of protest” from the allergic center-fielder.

Responding to this assault upon his person, Murphy struck Pozinski in the nose, breaking his “oversize beak” and, Pozinski alleges, “ruining my looks” and “costing me millions in future product endorsements.” For his part, Murphy denies using Pozinski’s towel–not wishing to be “contaminated by his cooties”–and questions how many companies would hire as their spokesman “a .105 hitter with zits.”

After Murphy struck Pozinski, the errant right-fielder was “subdued” by players Tompkins, Gomez, and Jackson, during the course of which Murphy was partially disrobed, causing “great distress and confusion” among the female fans in attendance. While attempting to cover Murphy with a section of ground tarp, Manager Granger was punched in the stomach by someone, possibly third-base coach Dooley, causing him to swallow a “heavy, chrome-plated” police whistle. Manager Granger subsequently underwent abdominal surgery for removal of the whistle and is no longer in baseball. Coach Dooley himself sustained numerous lacerations and a concussion from the “forceful impact of his head” with a bat wielded by media personality and team publicist Melanie Baker. Ms. Baker, who has been linked romantically with right-fielder Murphy, testified she “saw red” and “lost her head” when it appeared “her man” was in danger.

AT THIS POINT the donnybrook became general and it is impossible to know for certain who did what to whom and how much of it was in the region of the groin. We do know that several players received black eyes, Trainer Panetta lost part of an ear and his St. Christopher medal, and third-baseman Collins was “forced to ingest” the business end of an athletic supporter. This last act we find especially distasteful.

Violence, except as required in the course of the game, has no place in competitive sports. Fighting is especially objectionable when, as in this case, so much of it took the form of biting and pinching. The image of baseball can only suffer if such acts are tolerated. The guilty must be punished. Therefore, Mr. Commissioner, it is our recommendation that the suspended coaches and players be recalled from their homes and be compelled to finish out the balance of the season–no matter how distasteful this may be for them. As our old coach used to say, “Strike a man and you make him smart, humble him and you make him wise.”

Yours for a better baseball, The Committee

C. D. Payne is an author residing in Sonoma County, where he crusades for better baseball. This essay is from his forthcoming book ‘Cut to the Twisp: The Lost Parts of Youth in Revolt and Other Stories’ (AIVIA; $12.95).