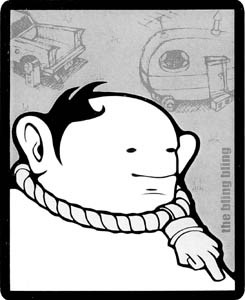 ‘Reverie’ exhibit a blast of fun

VAROOMING off the walls with humor and a wink, the “Reverie” show currently exhibiting at the A Street Gallery in Santa Rosa is anything but what the name might suggest. Taken from a tattoo on Santa Rosa photographer Brian Gaberman’s wrist, the exhibit’s name might be dreamy, but the vision is not. In fact, the collected exuberant gust from these five emerging artists is so confidently giddy that they themselves couldn’t contain it to just one room. Give a peek down the back hall to see the frenetic artistic graffiti that spill down the corridor.

Forget some old graybeard dying for his craft; what the young “Reverie” artists know is that this shit is fun.

Marrying strong design backgrounds (all of the exhibitors are commercial artists) with the aesthetics of skateboard and comic-book culture, “Reverie” notably features San Francisco illustrator and Slap magazine cartoonist Jeremy Fish, whose work threatens to overwhelm the rest. Fish knows his kitsch, taking in TB&A his cigar-brown trophy plaques from some mythic dad’s rec room wall and replacing that presumed stuffed swordfish with friendly, sculpted genital faces inevitably pierced with a cleanly gory bone that would be at home in Wilma Flintstone’s hair.

Similarly, Fish pounces upon a dreary, oversized, Goodwill-type landscape (The Golden Sea) by someone else, painting into a bottom corner the short illustration of a man on his car, beer in hand, enjoying a relaxing outdoor pee in midstream. All Shapes and Sizes, a four-panel painting that puts a pinkly bulging female torso together in pieces, offers a better background than foreground, as Fish puts all hooters/melons/jugs allusions into a humorous ongoing stream behind its horror of flesh.

“Fantastic!” proclaims much of the doodle-scrawl on San Franciscan Ellery Samson’s work, both in the gallery and in the hall-wall frenzy of the studio warren behind the A Street space. Tabs of Acid, a large greeny painting on a recycled wood panel, offers at first look a quick-draw of eyes and noses in continuing profile. But don’t stand on tippy-toe, as that raw sharp nail sticking directly out of the top left corner might pierce an eye or nose or two. The wonderful paranoia in Samson’s restless “canvas” is perhaps explained by the large, painstaking, jigsaw plywood cutouts he otherwise produces of subjects as diverse as cute baby chicks and punk faves Stiff Little Fingers.

Santa Rosa designer/illustrator Matt O’Brien paints directly onto the gallery walls, adding loosely constructed found-wood sculptures to such oversized works as Nimbus. O’Brien aims to control the tension of the wall by exactly controlling what happens on it permanently, creating his own chaos and then working to subdue it.

THIS IS WHERE the show quiets, not slows, down. Brian Gaberman’s silver gelatin black-and-white prints push to explore those limits that photography can still use for surprise. Often shot literally from the belly, at grass level, these silent worlds of down-falling farm structures and upswelling steeples fade purposefully before their own edges, offering a select myopia that have the In Cold Blood chill of an outsider’s creep.

San Francisco painter Jessica Kerollis perhaps offers the most frankly serious work here, but she also incongruously aims for a light gaiety by appending paper party hats and an eight-ball balloon to her portraits. Using acrylic and pastels, Kerollis produces lush rich symbols of fading girlhood, but seems afraid to allow them the full grandeur of their dark beauty, instead adding the ha-ha element of such paper toppers.

Curated by Liana Hibbard, the 20-something college-going daughter of A Street Gallery owner Andrea Hibbard, “Reverie” is by her friends for her friends, and the spacious invitation of “Reverie” is: Ain’t we all?