.Such a Supple Wrist 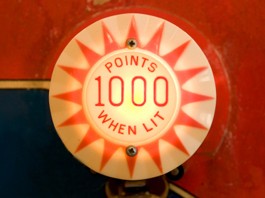 In 1871, British inventor Montegue Redgrave registered a patent for Improvements in Bagatelle, a large, clunky game played with a tabletop and balls. Thus, in the same year the first Major League Baseball game was played, the seeds were planted for another great leisure tradition: the pinball machine.

Baseball is definitely here to stay, but pinball has sadly suffered a slow, merciless death. It’d be convenient to blame the accessibility of home video game systems, but for a more in-depth look at the self-fulfilling prophecy of pinball, see the excellent DVD documentary Tilt, which proves that pinball companies just plain stopped making machines. Even with the record-breaking success of the Addams Family pinball game in the mid-’90s, Gottleib went under, Sega sold its pinball operations and Williams deep-sixed its pinball division after George Lucas’ ludicrously strict demands surrounding a costly Star Wars: Episode I pinball machine essentially killed the industry in 1999.

Today, there is only one company in the United States—Stern Pinball in Chicago—that makes newer pinball machines, and even then, they’re all licensing tie-ins for current movie franchises like Pirates of the Caribbean or Shrek. This sad fact makes the Pacific Pinball Exposition in Marin all the more important. Collecting over 300 incredible pinball machines from every era, cla-clanging and ding-ding-dinging away, the Pinball Expo is a reminder that entertainment doesn’t have to be complicated to be fun.

At last year’s inaugural expo, vintage machines from the 1930s sat underneath Christmas lights alongside newer custom models designed for The Sopranos or for the Nordic rock band the Hellacopters. With a large electro-mechanical presence, the hall filled with cla-clangs and ding-ding-ding-dings; “The Science of Pinball” display explained roto-targets, solenoids and coil sleeves next to a completely see-through machine; guest speakers and a competitive pinball tournament kept the weekend lively, and attendees played a lifetime’s worth of fantastic ‘ball.

It was such a success that the event’s organizers at the Lucky Juju Pinball Gallery in Alameda—a group dedicated to bringing a pinball museum to the site where Alameda’s famed Neptune Beach Amusement Park once stood—decided to do it again this year. The best part? With the price of admission, almost all of the 300 pinball machines are free to play, all day long. Montegue Redgrave would be proud.

Next ArticleSteve Jobs Craps Pants, Cries In Corner Over Royalties