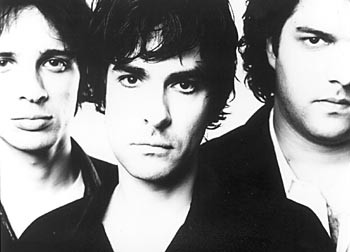 Exorcising the ghost of Howlin’ Wolf

EIGHT YEARS after their founding by former Pussy Galore guitarist and vocalist Jon Spencer, the Blues Explosion continue to dish up a potent brew of rock, blues, soul, hip-hop, and R&B, all delivered with an overdriven, post-punk garage sensibility. The new disc kicks off with a bad-ass dance groove–sort of a raggedy version of New Orleans funkmeisters the Meters–and careens wildly through a wasted landscape littered with broken bits of such blues-influenced ’60s- and ’70s-era rockers as the Stones, Yardbirds, Amboy Dukes, and Them while conjuring up the ghosts of Howlin’ Wolf and Hound Dog Taylor. This is no effete intellectual conceit–think Beastie Boys-meet-Brian Jones at a James Brown concert after a two-week bender. Down ‘n’ dirty, bad-tempered tunes for the blues millennium. Greg Cahill

RECENTLY record companies have flooded us with so many generic electronic music compilations that it’s tempting to dismiss the whole lot. But the second volume in Nettwerk’s Plastic series shines because of its superlative artists and confectionery pop appeal. Featuring such stars of the rave scene as the Crystal Method, William Orbit, and Sasha, the album combines exuberant dance anthems with playful nods to New York electro and great remixes of pop musicians. In lesser hands, such remixes tend to be embarrassing gimmicks–ever hear the disco version of the Celine Dion Titanic song? Here, though, the remixers respect the visions of the original songs even while totally transforming them. Thus what looks disastrous on paper–like Roni Size’s jungle remix of Sarah McLachlan’s “Sweet Surrender”–ends up sounding surprisingly ethereal and innovative. Other treats include a bouncy, delirious reworking of Cornershop’s “Brimful of Asha” and a beguiling, hypnotic take on French popsters Autour DeLucie’s “Sur tes Pas.” Michelle Goldberg

IT’S OBVIOUS that Golden Smog intend to show listeners a good time. The perky Brit-poppy vocals and crashing rock pulse set the tone for this infectious 15-pack set. Vocalist Craig Johnson’s keening nasal twang exudes wounded pride as he sings about friends welcoming him “with broken arms/ They don’t mean any harm.” Smog are something of a supergroup, boasting members from Wilco (Jeff Tweedy), Soul Asylum (Dan Murphy), and Big Star (Jody Stephens), among others. Johnson, Tweedy, and Jayhawk Gary Louris divvy up the vocals; they are equally fine stylists. “Until You Came Along” is a beery sing-along shot through with self-deprecating Dylanesque humor. Throughout, guitarists Gary Louris, Marc Perlman, and Tweedy reel off hybrid licks that can tug at your gut or soothe your soul. Nicky Baxter