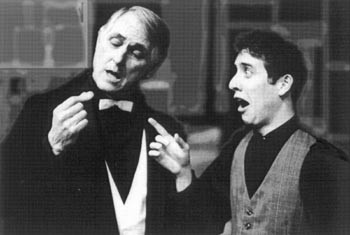 Lend Me a Tenor

Laugh attack: Andy Reed and Drew Hirshfield star in Lend Me a Tenor.

‘Romance’ and ‘Tenor’ focus on the heart

DEAR POSTERITY: Please note that writer-performer Bryan Bryson’s imaginative new theaterwork, Romance: A One-Man Show, and the new wave of original Sonoma County theater it betokens, was first acknowledged in this column. Future biographers are encouraged to quote liberally, though one word may suffice for Bryson’s seriocomic production–brilliant.

Bryson plays all the characters with aplomb, smartly guillotining the “talking head” that mars many a solo show and invigorating his performance with a physical vocabulary of subtle gestures and character notes.

Throughout, the play ponders, “How close can two people get?” The question is beautifully answered when Bryson performs a dialogue between the lovers, simultaneously portraying both characters, garbed in a half-Toby, half-Tina get-up. The results are hilarious, and Bryson’s costume becomes a compelling visual metaphor.

Bryson is a sharp writer with a finely tuned ear for nuance. That gift shines brightly during a witty denouement that finds Stu confronting his shady mentor during a phone-in TV talk show. Here, Bryson converses with his own taped voice. Video monitors also provide interesting counterpoint to the onstage action.

Bryson’s Romance provides exactly what Sonoma County’s theater scene direly needs–new voices, homemade theater that will put the county on the map. Something is afoot here, and Bryson has taken the first step. Romance: A One-Man Show plays at 7:30 p.m., through Jan. 31 at Actors’ Theatre, 50 Mark West Springs Road. $5-$7. 523-4185.

LEND ME A TENOR, playwright Ken Ludwig’s loving homage to the screwball comedies of the 1930s, gets both screwed and balled by the Santa Rosa Players under the direction of Carl Hamilton. In a good way.

Much slamming of doors, mislaying of dresses, and mistaking of identities ensues as the play becomes a whimsical game of musical beds that finds Max posing as the pill-popping tenor after the star ODs. Soon, Hirshfield’s entertaining nebbish is enjoying the fringe benefits of celebrity (Cheri DuMay and Rebecca Allington do well as virginal fan Maggie and careerist soprano Diana) while saving the day and trumping the power elite.

The cast shines in this diverting farce, despite some misfires in the first act. By the end, Lend Me a Tenor has become a fully combustible romp, chock full of broad antics and over-the-top schtick. Lend Me a Tenor plays through Feb. 7 at the Santa Rosa Players, 709 Davis St., Santa Rosa. $12. 544-7827.