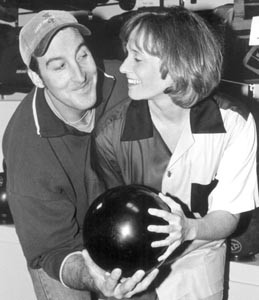 YES, IT WOULD be poor form to reveal the nature of actor Dodds Delzell’s groundbreaking entrance in More Fun Than Bowling, now playing at Actors’ Theatre. Suffice it to say, the secret handshake between Houdini and Ed Wood is an admirable feat of peat and a plot twist par excellence. It’s a dirty job Delzell does with aplomb, and you’ll dig it.

Meet Jake Tomlinson (the earthy Delzell), a buffoonish bowling alley proprietor whose love life is riddled with gutter balls. Two of Jake’s three young wives died in freak bowling-related accidents–the other left him lovesick and single-handedly raising his firecracker daughter Molly (Rebecca Miller). The play finds Jake keeping a graveside vigil with a tattered copy of Reader’s Digest, pondering his predicament, further addled by a prophecy of his own untimely demise.

Skulking in the shadows throughout is the ominous Mr. Dyson (a hilarious Al Liner), who sports a mafioso’s fedora, dark glasses, and a pistol as he alludes to his inevitable confrontation with Jake. Constantly spouting a barrage of silly-ass automotive metaphors, Mr. Dyson speaks directly to the audience, leading it by the hand through Dietz’s convolution of confessionals and whimsical encounters with the dead.

If only the plot were laid out as plainly as the plots dominating the set (real dirt was wheelbarrowed in to create graves). The play’s knotted through-line is the result of an unconventional and often muddled experiment in storytelling, as the playwright shirks linear development for a circuitous unraveling that almost works, thanks to director Thomas’s keen sense of pacing.

Most of the play seems to linger at the periphery of the slightly unhinged Jake’s memory as he communes with his dead wives through a convoluted series of flashbacks corralled by discursive tête-à-têtes with the audience.

Throughout, Dietz comically proves bowling jargon an effective emotional vocabulary as Jake touts his homespun philosophy–at once fatalistic and direly romantic–revealing he is equal parts lovable lug and Zen master. Indeed, bowling does have its own protocols and perspective, the humorous sanctity of which Delzell conveys with wholehearted zeal. Therein lies what is perhaps the play’s most profound message: The universe offers an infinite amount of portals through which to understand its workings. For Jake this window is bowling. Who hasn’t had a 7-10 split in their life?

Kristen Greer is wonderful as the sweet-hearted hairdresser Loretta, wife No. 3, who briefly helps reset Jake’s pins after the death of her predecessor and best friend Lois (Janice Ray) before she too is snuffed by the bowling gods. Greer infuses Loretta with such genuine warmth and vigor that one easily empathizes with Jake’s pain at her loss.

Such onstage synergy continues with Ray’s distinctly drawn Lois, who provides a crisp, sensible balance to Jake’s off-kilter demeanor. Pugnacious teenager Molly is likewise given a nuanced portrayal by Miller. This promising young actress’ earnest portrayal of the exasperated teen is a near perfect score.

Though the first act leaves some spares (the playwright drops the ball with his meticulous attention to back-story), the second ably knocks down the pins and ends with a strike. AT’s More Fun Than Bowling is more fun than bowling, and you don’t even have to change your shoes.